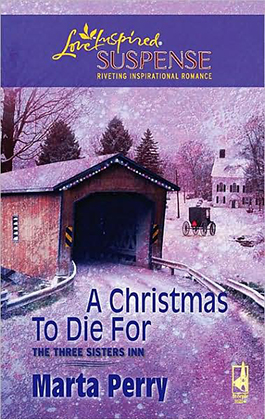 She was lucky to be alive after the hit-and-run that nearly took her life. But History seemed to be repeating itself when Rachel Hampton spied a car speeding down the dark road.

Tyler Dunn came to Rachel’s family inn seeking justice for a decades-old crime. Rachel wanted to trust the attractive architect, but he was too secretive...until she uncovered a shocking link to her own past. Suddenly a holiday season amid the Plain People swarmed with hidden danger as Rachel found herself a killer’s target.

"A CHRISTMAS TO DIE FOR is an exceptionally written story in which danger and romance blend nicely.”
— Romantic Times Bookreviews Rating 4.0

"A CHRISTMAS TO DIE FOR is the perfect suspense for the holiday season. The twists and turns make it impossible to guess who the murderer really is without finishing the book.”
— Laura Hilton, Reviewer

"A CHRISTMAS TO DIE FOR is an enticing blend of romance and suspense. Marta Perry always delivers a good story.”
— Barbara Warren, Blue Mountain Backroads

Rachel Hampton stood on the dark country road where, seven months ago, she’d nearly died. The dog pressed against her leg, shivering a little, either from the cold of the December evening or because he sensed her fear.

No, not fear. That would be ridiculous. It had been an accident, at least partially her fault for jogging along remote Crossings Road in the dark. She’d thought herself safe enough on the berm of the little-used gravel road, wearing a pale jacket with reflective stripes that should have been apparent to any driver.

Obviously it hadn’t been. He’d come around the bend too fast, his lights blinding her when she’d glanced over her shoulder. But now she was over it, she--

Her heart pumped into overdrive. The roar of a motor, lights reflected from the trees. A car was coming, he wouldn’t see her, she’d be hit again, thrown into the air, helpless—

She grabbed Barney’s collar and stumbled back into the pines, pulse pounding, a sob catching in her throat as she fought to control the panic.

But the car was slowing, stopping. The driver’s side window slid smoothly down.

“Excuse me.” A male voice, deep and assured. “Can you tell me how to get to Three Sisters Inn?”

How nice of him to ignore the fact that she’d leaped into the bushes when she heard him coming. She disentangled her hair from the long needles of a white pine and moved toward him.

“You’ve missed the driveway,” she said. “This is a back road that just leads to a few isolated farms.” She approached the car with Barney, Grams’s sheltie, close by her side. “If you back up a bit, you can turn into a farm lane that will take you to the inn parking lot.”

He switched on the dome light, probably to reassure her. Black hair and frowning brows over eyes that were a deep, deep blue, a pale gray sweater over a dress shirt and dark tie, a glint of gold from the watch on his wrist, just visible where his hand rested on the steering wheel. He didn’t look like a tourist, come to gawk at the Amish farmers or buy a handmade quilt. The briefcase and laptop that rested on the passenger seat reflected that.

“You’re sure the proprietor won’t mind my coming in that way?”

She smiled. “The proprietor would be me, and I don’t mind at all. I’m Rachel Hampton. You must be Mr. Dunn.” Since she and Grams expected only one visitor, that wasn’t hard to figure out.

“Thanks, but it’s just a few yards. Besides, I have the dog.” And I don’t get into a car with a stranger, even if he does have a reservation at the inn.

Maybe it was coming so close to death that had revised her carefree ways. Either that, or the responsibility of starting the bed and breakfast on such a shoestring had forced her to grow up. No more drifting from job to job, taking on a new restaurant each time she became bored. She was settled now, and it was up to her to make a success of this.

She stepped back, still holding Barney’s collar despite his wiggling, and waited until the car pulled into the lane before following it. She gestured Dunn to a parking space in the gravel pull-off near the side door to the inn.

He stepped out, shrugging into a leather jacket, and stood looking up at the inn. It was well worth looking at, even on a cold December night. Yellow light gleamed from the candles they’d placed in every one of the many nine-paned windows. Security lights posted on the outbuildings reflected from the pale golden glow of the historic Federal-style sandstone mansion. It had been home to generations of the Unger family before necessity had turned it into the Three Sisters Inn.

Rachel glanced at the man, expecting him to say something. Guests usually had an awed, or at least admiring, comment at first sight. Dunn just turned away to haul his briefcase and computer from the front seat.

Definitely not the typical tourist. What had brought him to the heart of Pennsylvania Dutch country at this time of year? Visiting businessmen, especially those who traveled alone, were more likely to seek out a hotel with wireless connection and fax machines rather than a bed-and-breakfast, no matter how charming.

“May I carry something for you?”

He handed her the computer case. “If you’ll take this, I can manage the rest.”

The case was heavier than she’d expected, and she straightened, determined not to give in to the limp that sometimes plagued her when she was tired—the only remaining souvenir of the accident.

Or at least, she’d thought that was the only aftereffect until she’d felt that surge of terror when she’d seen the car. She’d have to work on that.

“This way. We’ll go in the side instead of around to the front, if you don’t mind.”

A man of few words, apparently. Dog at her heels, she headed for the door, hearing his footsteps behind her. She glanced back. He was taller than she’d realized when he sat in the car—he probably had a good foot on her measly five two, and he moved with a long stride that had him practically on her heels.

She went into the hallway, welcoming the flow of warm air, and on into the library. She didn’t usually bring guests in through the family quarters, but it seemed silly to walk around the building just to give him the effect of the imposing front entrance into the high-ceiled center hall. The usual visitor ohhed and ahhed over that. She had a feeling Tyler Dunn wouldn’t.

“My grandmother has already gone up to bed.” She led the way to the desk. “You’ll meet her in the morning at breakfast. We serve from seven-thirty to nine-thirty, but you can make arrangements to have it earlier, if you wish.”

He shook his head, glancing toward the glowing embers of the fire she’d started earlier. Grams’s favorite chair was drawn up next to the fireplace, and her knitting lay on its arm.

“That’s fine. If I can just get signed in now and see my room—“

“Of course.” Smile, she reminded herself. The customer is always right. She handed him a registration card and a pen, stepping back so that he had room to fill it out.

He bent over, printing the information in quick, black strokes, frowning a little. He looked tired and drawn, she realized, her quick sympathy stirring.

“That’s great, thanks.” She imprinted the credit card and handed it back to him. “You indicated in your reservation that you weren’t sure how long you’d want the room?”

She made it a question, hoping for something a little more definite. With all the work she’d been doing to lure guests for the holiday season, the inn still wasn’t booked fully. January and February were bound to be quiet. In order to come out ahead financially, they needed a good holiday season. Her money worries seemed to pop up automatically several times a day.

“I don’t know.” He almost snapped the words. She must have shown a reaction, because almost immediately he gave her a slightly rueful smile. “Sorry. I hope that doesn’t inconvenience you, but I have business in the area, and I don’t know how long it will take.”

“Not at all.” The longer she could rent him the room, the better. “Perhaps while you’re here, you’ll have time to enjoy some of the Christmas festivities. The village is planning a number of events, and of course we’re not far from Bethlehem—“

“I’m not here for sightseeing.” His gaze was on the dying fire, not her, but she seemed to sense him weighing a decision to say more. “That business I spoke of--there’s no reason you’d recognize my name, but I own the property that adjoins yours on one side. The old Hostetler farm.”

She blinked. “I didn’t realize—“ She stopped, not sure how to phrase the question. “I thought the property belonged to John Hostetler’s daughter.”

Who had annoyed the neighbors by refusing to sell the property and neglecting to take proper care of it. The farmhouse and barn had been invaded by vandals more than once, and the thrifty Amish farmers who owned the adjoining land been offended at the sight of a good farm going to ruin.

“My mother,” he said shortly. His face drew a bit tighter. “She died recently.”

That went a long way toward explaining the tension she felt from him. It didn’t excuse his curtness, but made it more understandable. He was still grieving his mother’s death and was now forced to deal with the unfinished business she’d left behind.
Order Info

“I’m so sorry.” She reached out impulsively to touch his arm. “You have my sympathy.”

He jerked a nod. “I’m here to do something about my grandfather’s property. My mother let that slide for too long.”

It would be impolite to agree. “I’m sure the neighbors will be glad to help in any way they can. Are you planning to stay?”

“Live there, you mean?” His eyes narrowed. “Certainly not. I expect to sell as soon as possible.”

Something new to worry about, as if she didn’t have enough already. The best offer for the Hostetler farm might easily come from someone who wanted to put up some obnoxious faux Amish atrocity within sight of the inn.

“That’s too bad. It would have been nice to hear that family would be living there again.”

She’d made the comment almost at random, but Tyler Dunn’s expression suggested that she’d lost her mind.

“I don’t know why you’d think that.” He bit off the words. “I’m hardly likely to want to live in the house where my grandfather was murdered.”