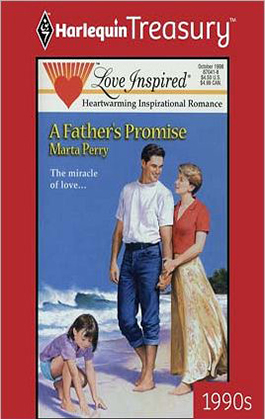 Just when teacher of the deaf Leigh Christopher was about to give up on her God-given talent, she bonded with the little girl she met on the beach. She vowed to do anything to help young Sarah--even if it meant clashing with the child's fiercely protective father. But the quiet agony in Daniel's eyes told Leigh that his daughter wasn't the only one who needed her.

Despite herself, Leigh was drawn to Daniel and longed to ease the bitterness in his heart. Would it take a miracle from above for Daniel to accept Leigh's tender love?

The moment he realized his daughter was lost, Daniel Gregory knew his life had to change.

Alone as usual, he balanced on the second-story beam of what was going to be his oceanfront inn and stared down at the teenage baby-sitter. She stood just outside the construction site, tears streaking her face. He'd feel sorry for her if not for the panic searing his nerves.

"How did this happen?" He swung himself to the sand. "How could you let a deaf child out of your sight?"

"I'm sorry, Mr. Gregory. Honest. I didn't mean to. But the phone rang, and she was just playing on the porch, and I thought I'd only be a minute..."

The girl's excuses ran out, and she gestured up the path to the house.

"You don't think she went toward the water?" Daniel's heart clenched. He shot a glance at the ocean that lapped the shores of the Georgia sea island. The tide was going out; the surf, a gentle ripple.

She shook her head, tears welling. "Sarah's scared of the waves. I don't think she'd go that way. I looked out by the road but didn't see her, so I ran down here to find you."

The girl dissolved in heart-wrenching sobs, and Daniel gave her shoulder a quick pat. He was about as helpless at comforting her as he was at taking care of his child, he thought bitterly.

"Come on, Patsy. We'll find her." He couldn't let the kid see how scared he was, or she'd be no help at all. "You go back up and search the house. I'll check the beach."

Patsy brushed tears from frightened brown eyes. "Right away. I'll look everywhere." She turned and darted up the path through sea grass and palmettos toward the house.

Daniel rounded the edge of the construction, scanning the beach. The usual few tourists, a fisherman or two. No little girl with dark hair in untidy braids and the cords of her hearing aid dangling like a necklace.

He forced himself to look again, tamping down the need to run, to shout her name. Shouting wouldn't do any good. Sarah wouldn't hear him.

His gut cramped. Sarah, where are you? If she was on the beach he'd see her, but she could be on any of a dozen paths that led through tangles of scrub growth toward the road. He had to make a choice. He jogged down the beach, his gaze probing every inch of sand and beach grass.

Two months. He'd had his daughter for two short months, and already something bad had happened. He was the only one in her life she could count on, and he'd let her down.

I promise. Sarah, I promise. I'll find a way to take better care of you. I promise. Just be all right.

"Hurry up, Aunt Leigh. The tide's going out, and I want to look for shells."

Leigh Christopher smiled down at her impatient nephew. Mark had to do everything in a hurry, just like his mother. Her sister, Jamie, always had an agenda in mind, and Jamie's seven-year-old son echoed that quality. Meggie, Mark's five-year-old sister, lagged behind, happily inspecting the tiny insect that crawled along the fan of a palmetto.

"We've got plenty of time, Mark." Leigh shifted a load of beach towels from one arm to the other.

Mark cast an expert glance at the sun. With his blue eyes and freckles he looked just like Jamie. But Jamie would have been glancing at the businesslike watch she always wore.

"You said you had to go back to the house and work on your... your resumes." He said the unfamiliar word carefully. Mark always had to know the right word for things. "So we have to hurry."

"We're not in that much of a rush," Leigh began, when Meggie tugged at her hand. Leigh turned to her. "What is it, sweetie?"

"We have to help her." Meggie trotted ahead.

Leigh gazed along the path that wound to the beach. Meggie had seen what she hadn't -- a child scrunched against the rough base of a palmetto, arms wrapped protectively around her legs, head down.

Leigh's heart thumped. Meggie was right. She might not know the word, but she knew what "losted" looked like. Leigh hurried toward the little girl. "Hi, there," she called. "Are you okay?"

The child didn't respond. Meggie scampered up to her and tugged her arm. "Hey, are you losted?"

The little girl jerked her head up at the touch, panic filling eyes that were as dark a brown as her hair. Leigh saw what she wore around her neck, and it hit her like a blow to the heart. A hearing aid. The child was deaf.