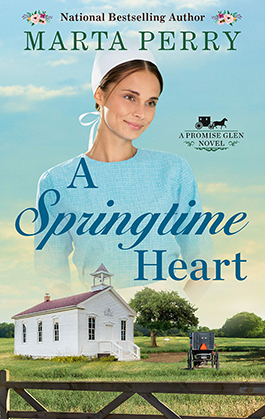 A second chance at love blooms in the quaint Amish community of Promise Glen, from national bestselling author Marta Perry.

Dorcas Beiler's reckless teenage years are far behind her. She's serious and responsible now, and the good people of Promise Glen trust her with the education of their children. But when her first love returns after years of exile from the community, her past comes rushing back. Thomas is the only one who knows her secret, and despite his careless charm and teasing manner, she refuses to let her guard down.

Thomas Fisher has plans. Plans to start a construction company and prove himself a success to all those who doubted him, and plans to find the woman he left behind. His chance comes when he lands the opportunity to rebuild the stable and shed at the community school. He won't be paid for his time, but he'll be able to showcase his abilities...and spend time with Dorcas.

Scenting love in the air, Dorcas's young pupils make excuses to bring them together. As old feelings stir, Dorcas and Thomas wonder whether their first love might also be their last.

A glance at the schoolroom clock told Dorcas Beiler that her scholars’ recess was almost over. She stepped back outside, where the schoolyard seemed overwhelmed with the sights and smells of springtime in Promise Glen, Pennsylvania.

She took a deep breath, feeling as if she inhaled the very essence of spring. The land around her woke with the spirit of new life, with the bulbs they’d planted along the porch bursting open. Certainly her scholars felt the change. They’d been rambunctious all day, and she could only hope that recess had worn off a little of their excess energy.

Dorcas reminded herself that she was too old to experience spring as the children did. But even for her, with her schooldays long behind her, a sense of restlessness stirred, lifted its head, and had to be pushed back down again.

It had been one thing to give into that longing when she’d been a heedless teenager looking for something beyond the confines of Amish life. It had been dangerous enough then. Now it would be a disaster. She was an adult now, an old maid at twenty-five, and the respected teacher of the Orchard Hill Amish school. This was her life, and it suited her just fine.

Reaching up, she caught the bell rope and pulled. The sound brought a quick glance from Anna Stoltzfus, her teenage helper, who flagged down the boys she’d been pitching to in a pick-up softball game. Anna was quick to respond—the boys not so eager.

Of course, Anna was probably dreaming of having a school of her own one day, while the boys’ thoughts were on their game. Dorcas smiled, noticing the older girls watching as the boys jogged in from the field, pushing and jostling each other. No doubt the girls were reacting to spring in a very different way, if their sidelong glances at the boys were any indication.

Her younger scholars were the first to reach the door, their faces touched by the sun as they smiled up at her, eyes bright, hair clinging damply to their foreheads. Then came some of the older ones. Esther Fisher bounced to a stop in front of her, smile flashing, her blue eyes lit with excitement.

“Teacher Dorcas, have you heard?” Her voice lifted on the words, but she didn’t wait for a response. “My brother Thomas is home at last!”

Dorcas stood very still, not letting herself think. Fortunately Esther rushed on to corner someone else with her good news. She couldn’t know, thank the good Lord, that it wasn’t exactly good news for her teacher. Upsetting, even frightening, yes. Good, no.

The habits of the past seven years as a teacher asserted themselves. Whatever her personal problems, she didn’t bring them into the classroom. Fixing what she hoped was a pleasant smile on her face, Dorcas focused on getting her scholars settled, returning to her desk, and setting them to work on their spelling words.

“Spelling bee starts in fifteen minutes,” she warned at a faint buzz of sound. “You’d best concentrate now, ain’t so?”

Silence fell. Dorcas exchanged a smile with Anna, and they started at opposite sides of the schoolroom to walk up and down the rows of desks, alert for anyone having problems or giving into the temptation to pester his or her neighbor.

Dorcas had started with the youngest children, and she paused between the six-year-old Raber twins, Matthew and Mark, the stepchildren of her dear friend Sarah Yoder, now Raber. If anyone was likely to have trouble settling to work, it would probably be Matthew. In fact, as she stepped past him, Matthew looked up, his mouth forming an Oh of surprise.

Suppressing a smile, she whispered in return. “What did you forget, Matthew?”

“Mammi says will you stop on your way home if you have time? She has a surprise for you. It’s—”

“Shhh.” His brother nudged him. “It’s a secret. Remember?”

“You mustn’t tell me then,” she said quickly. “Get working on your words, now.”

Dorcas moved on, wondering. Could Sarah have heard that Thomas Fisher was back from the relatives in Ohio where he’d been sent when they were teenagers? Sarah knew something about the relationship between Dorcas and Thomas—something, but thankfully not everything. No one knew that, except for her. And Thomas, of course.

Feeling as if she were sweeping crumbs from the floor, Dorcas swept the pesky memories from her mind. She had to start the spelling bee.

The afternoon went on its usual course, and aside from an inability to concentrate, Dorcas flattered herself that no one would guess she felt as if she’d been butted by her brother’s irritable Billy-goat.

By the time all the spellers had been congratulated, she felt as if she had become, if not settled, at least right-side-up again. She picked up the copy of The Little House in the Big Woods, which lay on her desk, ensuring instant silence as her scholars anticipated the chapter she’d read to them today. Safe in the adventures of Mary and Laura, they would all, including her, forget everything else.

The hands of the clock reached three, and Dorcas finished the paragraph and closed the book. Her twenty-four scholars waited silently until she smiled at them and then gave the nod that meant they were dismissed.

That, she decided, was something young Anna had yet to master. When the girl had figured out how to control the classroom with a look, Dorcas would be convinced she had the makings of a teacher.

As usual, she and Anna fell in behind the children who, grabbing lunch boxes and sweaters, headed for the door, chattering loudly.

“Did you hear?” Anna, her usually shy face filled with curiosity, repeated Esther’s question. “Thomas Fisher is back in Promise Glen.”

“Yah, Esther told me.” She managed a smile that she hoped looked normal. “I’m sure his family is wonderful glad.”

Anna nodded, but she still had a question in her pale blue eyes. “I guess. But folks are saying his daad won’t be so happy. I guess it’s extra hard for a minister of the church to have a son go wrong.”

So that was what people thought of it, at least according to Anna, who was something like a third cousin to Thomas in the tangle of family relationships among the Amish. Not knowing what Minister Lucas Fisher might be thinking, she wouldn’t comment. But it would be a sad thing if Thomas returned and didn’t receive the welcome usually accorded to a prodigal son.

Not, of course, that Thomas had run away from the church. As far as anyone knew, he’d been faithful in attendance with his aunt and uncle out in Ohio.

Her mind still wrestling with the question, Dorcas stepped outside in the wake of the children, blinking for a moment in the bright sunlight. Then her vision cleared, and she saw the masculine figure leaning negligently against the porch post, the sunlight glinting on his auburn hair, his dark blue eyes lit by teasing laughter at the sight of her.

Thomas Fisher was not only back in Promise Glen, he was here, at her school. She took a deep breath, trying not to stare. He’d been a boy when he left, all gangly arms and legs that he didn’t seem to know what to do with. But he was a man now, with a man’s sturdy frame and hard muscles.

He pushed himself away from the post with a single, fluid movement and came toward her, somehow giving the impression that he was laughing at her. If he was, she could be sure that in some ways, Thomas hadn’t changed a bit.

The only question was what she was going to do about him.