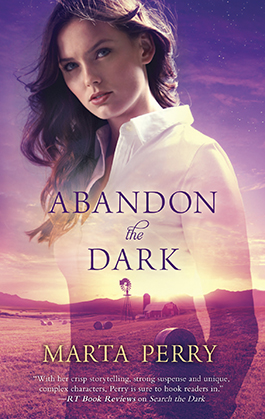 Facing the past can be deadly…

Small-town life isn't for everyone. Twenty years ago, Lainey Colton spent one perfect summer in Deer Run with her beloved great-aunt Rebecca. Since then, the beautiful graphic designer has been a gypsy, calling no place home. Now Rebecca is gravely ill, so Lainey has returned to Deer Run to care for her…and to escape her mistakes.

Lawyer Jake Evans gave up a high-powered job to build a quieter life in the small Pennsylvania town. So when a beautiful stranger appears after twenty years gone, he naturally questions her motives. Still, he is drawn to Lainey. But no amount of attraction will matter if he can't keep her safe from a mysterious threat….

Lainey Colton jolted awake, her heart pounding in her ears. She stared into darkness so intense she couldn’t make out anything beyond the outlines of the strange bed. She sat upright, turning. A pale rectangle marked the window, and her panic waned.

How stupid. She was in Great-aunt Rebecca’s house, in tiny Deer Run, Pennsylvania. She’d fallen asleep, exhausted after the long flight and the stress of the past few weeks, in the bed that had been hers the summer she was ten.

Twenty years ago, but the room felt intimately familiar now that she was awake. She rubbed the gooseflesh on her bare arms. The dream that woke her must have been something out of a horror movie. Odd, that she couldn’t remember anything about it.

But maybe just as well, since she had no desire to slip back into nightmares. Lainey plumped the pillows, straightened the hand-stitched quilt, and settled herself to sleep.

Sleep seemed to have fled. As her eyes grew accustomed to the dark, she made out the shapes of the chest of drawers, the rocking chair, and the bookshelf which still held the complete set of Laura Ingalls Wilder books she’d devoured as a ten-year-old. Her Amish great-aunt probably wouldn’t have approved of most of Lainey’s reading choices, but she’d been happy to see her Englisch great-niece reading the Little House books.

Twenty years. Lainey moved restlessly on the pillow. She hadn’t been back in all that time, at first because of her mother’s habit of jumping from husband to husband, and later because of her own gypsy tendencies.

Guilt flickered. Aunt Rebecca had been kind to her during one of the most difficult parts of a troubled childhood. Lainey should have managed to come back, instead of being content with the weekly letters they exchanged. Being Amish, Aunt Rebecca didn’t have a phone. Or electricity, a fact brought home to Lainey when she’d fumbled for non-existent light switches in the dark.

She’d finally returned when summoned by an abrupt phone call from her great-aunt’s lawyer. Rebecca had had a fall and suffered a stroke. She’d asked for Lainey. The attorney, one Jacob Evans, hadn’t sounded particularly approving. Well, Lainey would deal with him in the morning.

She’d planned to get a motel near the airport in Pittsburgh and drive up tomorrow morning, but once she’d picked up a rental car, worry and tension had impelled her onto the road to Deer Run. What difference did it make if she arrived after midnight? She knew where the house key was kept, though if she’d thought about the absence of electricity, she might have opted for a motel.

Aunt Rebecca would laugh at Lainey, coming to visit an Amish home equipped with her smart phone, her computer, her hair dryer, and all the other devices she thought she couldn’t do without.

But the laughter would be gentle. Aunt Rebecca never judged, never made a person feel stupid or guilty or unwanted. Her love had been a balm to a lost child whose familiar world had slipped from her grasp one too many times.

Now it was Lainey’s chance to repay that kindness. In the morning she’d touch base with the attorney and then head for the hospital to find out how bad Aunt Rebecca’s condition was and what needed to be done.

If this trip had happened to coincide with an excellent time for her to leave St. Louis—well, no one here need ever know that, although if the task of helping her great-aunt was as difficult as the attorney’s tone had suggested, she might have jumped from the proverbial frying pan into the fire.

In any event, she was clearly not going to drift back to sleep. Lainey swung her legs out from under the covers. She’d go downstairs and brew a cup of Aunt Rebecca’s herbal tea. But first she’d pull on some sweats. The house had grown cold, and she hadn’t the faintest idea how the furnace worked.

Thanks to her aunt’s habit of leaving a flashlight on the nightstand, Lainey was able to light her way to the stairs. She started down, her heavy socks making no sound on the treads, the beam of the flashlight picking up the hooked rug in the living room, the rocker that had always been her aunt’s favorite chair, the—

She stopped, gripping the bannister. A noise, faint and indefinable, came from the kitchen. Maybe the gas refrigerator made noises. How would she know?

Another step, and Lainey froze again. This time there had been a soft but definite thud. Someone…or something…was in the kitchen.

She held her breath, afraid the intruder would hear the slightest sound. The whole town probably knew that the homeowner was hospitalized, making the house an easy target for a break-in. Could she get back to the bedroom and her cell phone without being heard?

She eased back a step. And heard a loud meow. Lainey’s tension dissolved into a shaky laugh. Not someone. A cat. She hadn’t known Aunt Rebecca had a cat.

Sweeping the flashlight beam ahead of her, Lainey went quickly to the kitchen, pushing open the swinging door. The flashlight beam reflected shining green eyes, eerily suspended in the air, it seemed. The large black cat sat on the counter next to the stove, looking at her accusingly.

“Well, so who are you?” She reached out a hand tentatively, having a respect for pointed teeth and sharp claws.

The cat sniffed at her hand, apparently found it acceptable, and rubbed its head against her fingers.

“You are a handsome creature.” She stroked the shining length of his back, and it arched under her hand. “I didn’t even know Aunt Rebecca had a cat. What’s your name?”

He didn’t answer, of course, but he butted her hand again and then jumped lightly to the floor, where he pawed at the cabinet door.

“Is that where the cat food is kept?” Silly, to be talking to a cat, but the house was so deadly silent that it was a relief to make some noise. She opened the door and had a look.

No cat food, but there were several cans of tuna. Her visitor seemed to know what that was, because he hooked a paw over one can.

“All right, all right, I get the message. But I can’t believe that one of the neighbors isn’t feeding you while Aunt Rebecca is in the hospital.”

The hand can opener was in the top drawer, and in a few minutes she’d dumped the contents of the can into a bowl and set it down in front of the animal. The cat took one sniff and then began eating.

“I’m not sure what to do with you,” she muttered. “Are you supposed to stay inside or go out at night?” She prowled around the neat, sparsely furnished downstairs rooms, finding no sign of a litter box. “Out, I guess.”

The front windows of the living room looked out on the main road that ran through the village, becoming Main Street on its way. Nothing moved outside. Even when she craned her neck to look down toward the center of town, the streets and sidewalks were empty. Apparently at three a.m. the citizens of Deer Run were safe in their beds.

A small town would undoubtedly seem even smaller and deader when seen through the eyes of a thirty-year-old, rather than a ten-year-old. But she was here to see to Aunt Rebecca’s care, not to socialize.

And afterward? Afterward would have to take care of itself for the moment.

A loud meow interrupted her reverie. She returned to the kitchen to find that the cat had polished the bowl and now stood at the back door, looking fixedly at the knob as if he could turn it with the force his gaze.

“Okay, I get the message. You want out.” She opened the door. A cat spurted through it, disappearing into the shadows as if part of an illusionist’s trick.

Lainey stood for a moment in the doorway, looking out. Beyond a large shed, a stretch of weeds and brush led to the woods. There was a stream back that way someplace, as she recalled, and on the other side some Amish farms. That probably wouldn’t have…

She lost her train of thought as she caught movement from the corner of her eye. Near the shed, was it? She stared, trying to make out what it was, but nothing stirred.

Her imagination? Lainey frowned. She had plenty of that, certainly. But this had been real enough, she felt sure. If it had been an animal, it was a large one.

A shiver went down her spine. It’s nothing, she told herself. An over-active imagination and an over-tired body made a bad combination. But she locked the door carefully, just the same.