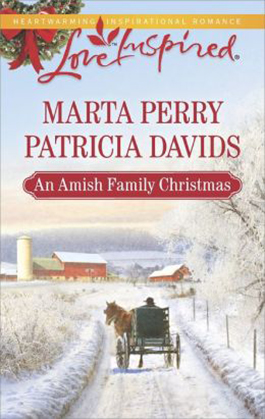 Amish teacher Susannah Miller suddenly has two new students: the children of her former love. Widowed father Toby Unger broke Susannah’s heart ten years ago, but now the handsome Amish man desperately needs help with his troubled little ones. Can the joy of the season reunite two lonely hearts in time for Christmas?

Susannah Miller stood behind the security of her teacher’s desk, watching the departure of school board member James Keim and his wife, and wondering if her annual Christmas program was going to spell the end of her job as teacher at the Pine Creek Amish School. The hollow feeling in her stomach brought on by Keim’s complaints lingered even after the door had closed behind him.

Too worldly? What would make the Keims think there was anything worldly about the Amish school’s Christmas program? The program celebrated typical Amish values and attitudes toward the birth of Christ. It had always been the highlight of the school year for her scholars and their families in this small valley community in central Pennsylvania.

Susannah stiffened her spine. It still would be, if she had anything to say about it. She glanced around the simple, one-room schoolhouse that had become so precious to her over the past twelve years. Everything from the plain green shades on the windows to the sturdy wooden desks to the encouraging sayings posted on the wall declared that this was an Amish school, dedicated to educating kinder for life in an Amish community.

Becky Shuler, Susannah’s best friend since childhood, abandoned the pretense she’d been making of arranging books on the bookshelves. She hurried over to put her arm around Susannah’s waist.

“Ach, Susannah, it wonders me you don’t look more upset. I’d be throwing something, if I had to put up with James Keim’s criticisms. The nerve of the man, coming in here and complaining about your Christmas program before he’s even seen it.”

Susannah shook her head, managing a smile. “I’m not upset.”

Or at least, she had no intention of showing what she was feeling. Becky was her dearest friend in the world, but she knew as well as anyone that Becky couldn’t keep herself from talking, especially when she was indignant on behalf of those she loved.

“Well, you should be.” Becky’s round cheeks were even rosier than usual, and her brown eyes snapped with indignation. “The Keims have only lived here less than two years, and he thinks he should tell everyone else how to live Amish. How he even got on the school board is a mystery to me.”

Shrugging, Susannah closed the grade book she’d been working on when the Keims had appeared at the end of the school day. “Komm, Becky. You know as well as I do that folks don’t exactly line up to volunteer to be on the school board. James Keim had been willing, even eager.”

“That’s certain sure.” Becky’s flashing eyes proclaimed that she was not going to be talked out of her temper so easily. “He was only eager to serve because he wants to make our school into a copy of the one where they lived in Ohio. All I can say is that if he liked Ohio so much, he should have stayed there instead of coming here and bothering us.”

Susannah suspected that was by no means all Becky had to say, and she’d have to do her best to head Becky off before she made a difficult situation worse.

“Becky, you know you shouldn’t talk that way about a brother in the faith. It’s not kind.”

“But it’s true.” Becky was irrepressible. “You of all people know what a thorn in the side he’s been. Ach, you know I wouldn’t say these things to anyone but you.”

“It would be best not to say them at all. James Keim has his own ideas of what an Amish school should be like. He’s entitled to his opinion.”

Based on his disapproving comments, Susannah suspected that Keim’s previous community had been more conservative than Pine Creek, Pennsylvania. Amish churches varied from place to place, according to their membership and their bishops. Pine Creek, being a daughter church to Lancaster County, was probably a bit less stringent than what Keim had been used to.

“You’re too kind, that’s what you are,” Becky declared, planting her fists on the edge of the desk. “You know perfectly well that he’d like to see his daughter Mary taking your place as teacher, so he could boss her around all he wanted.”

Susannah shook her head, but she had to admit there was some truth to what Becky said. As a thirty-year-old maidal who’d been teaching for a dozen years, Susannah wasn’t easily cowed, at least not when it came to her classroom and the young scholars who were like her own children. Young Mary would probably be another story, easily influenced by her father’s powerful personality.

“I don’t think Mary Keim has much interest in teaching from what I’ve seen,” she said, determined to deflect Becky’s ire. Picking up the cardboard box that held Christmas program materials, Susannah set it on the desk. “If we’re going to work on the program this afternoon, we’d better get started.”

Becky shook her head gloomily. “Mary might not want to teach, but she’d never stand up to her daad. You’re not going to let her help with the Christmas program, are you? She’d just be spying on you and reporting to him.”

“I’ll cross that bridge when I come to it,” she said. “Maybe she won’t offer.” Parents and older siblings often did volunteer to help with the Christmas program, but perhaps Mary wouldn’t. Susannah pulled the tape from the box lid, sure that would divert Becky’s attention.

Becky grabbed the flap and pulled the box open, her smile saying she knew Susannah was trying to distract her. “Just one more thing, and then I’ll stop, I promise. You’re not to pay any heed to Keim’s nasty comment about you not understanding the kinder because you’re unmarried, all right?”

“All right.” That was an easy promise to make. One thing she’d never had cause to question was her feelings for her scholars.

“After all, it’s not as if you couldn’t have married if you’d wanted to.” Becky dived into the box and pulled out a handful of paper stars. “Even after Toby left—“ She stopped abruptly, looking as if she wanted to stuff the stars into her mouth to keep herself still. Her cheeks flamed. “Susannah, I’m sorry, I—“

“Forget it.” Susannah forced her smile to remain, despite the jolt in her stomach at the mention of Toby’s name. “I have.”

That was a lie, of course, and one she should repent of, she supposed. Still, the gut Lord could hardly expect her to go around parading her feelings about the childhood sweetheart who had deserted her a month before their wedding was supposed to take place.

“Have you? Really?” Becky clasped her hand, her brown eyes suddenly swimming with tears.

“Of course I have,” she said with all the firmness she could muster. “It was ten years ago. My disappointment has long since been forgiven and forgotten. I wish Toby well.”

Did she? She tried to, of course. Forgiveness was an integral part of being Amish. But saying she forgave hadn’t seemed to mend the tear in her heart.

“Well, I wish Tobias Unger was here right now so I could give him a piece of my mind,” Becky declared. “He left so fast nobody had a change to tell him how ferhoodled he was being. And then his getting married out in Ohio to someone he barely knew…well, like I said, he was just plain foolish.”

News of Toby had filtered back to Pine Creek after he’d left, naturally, since his family still lived here. Everyone knew he’d married someone else within a year of leaving, just as they’d heard about the births of his two children and about his wife’s death last year. His mother had gone out to help with the children for a time, and she’d returned saying that Toby and the kinder really ought to move back home.

But he hadn’t, to Susannah’s relief. She wasn’t sure how she’d cope with seeing him all the time.

“Forget about him,” she said. “Let’s talk about how we’re going to arrange the room for the Christmas program. I have some new ideas.”

“You always have ideas,” Becky said, apparently ready to let go of the sensitive subject. “I don’t know how you keep coming up with something new every year for the Christmas program.”

“Ach, there’s always something new to find in Christmas.” Susannah felt a bubble of excitement rising in her at the thought of the much-loved season. “Maybe because we all feel like kinder again, ain’t so?”

“I suppose so.” Becky’s color had returned to normal, and her eyes sparkled. “Thomas and the twins have been whispering together for weeks now. I think they’re planning a Christmas surprise for me.”

“Of course they are. That’s what Christmas is, after all. God’s greatest surprise of all for us.” Susannah swung away from the desk, looking around the room. “What do you think about making the schoolroom itself surprising when folks come in?  Maybe instead of having the scholars all presenting in the front, we could turn everything sideways. That would give the kinder more space.”

She walked back through the rows of desks, flinging out her arms to gesture. “You see, if the audience faced this way—“

The door of the one-room school opened suddenly, interrupting her words. Susannah’s heart jolted, and she felt as if she couldn’t breathe.

She must be imagining things. Surely she was dreaming it. The man standing in the schoolhouse doorway wasn’t…couldn’t possibly be…Toby Unger.