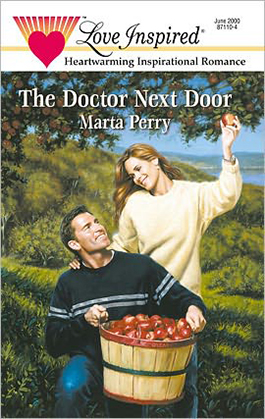 When Rebecca Forrester pledged her five-year-old heart to Brett Elliot, the idealistic doctor-to-be had vowed to return one day to care for her and the other townspeople. Brett had finally come home--but not to stay.

Bedford Creek's medical future rested in this sophisticated stranger's hands, and Rebecca prayed the Lord would help Brett see where he belonged.

God seemed to be giving Rebecca a chance to convince Brett to stay when he began helping out at the clinic. Was He also giving her the chance to claim the heart of the man she'd always loved?

Join the men of Hometown Heroes—Childhood friends who uncover love in their own backyards!

The young woman's golden brown eyes filled with a mix of shock and some other emotion Brett couldn't identify.

She grabbed his arm, pulling him out of the flow of people coming through the front door of the gracious Victorian home. "It's about time, don't you think?"

"About time?" Dr. Brett Elliot hadn't expected his hometown to stage a welcome parade to celebrate his return. But he also hadn't expected to be accosted at his best friend's engagement party by a beautiful woman he'd never seen before.

There'd been no mistaking the sarcasm in her voice. "The party started at eight, didn't it?" He detached his arm from her grip. People clustered in the adjoining rooms, leaving the wide center hallway quiet.

"The party? Yes." She glanced toward the crowded living room of the rambling old house, where the party obviously centered. Auburn hair curled around her shoulders; creamy skin glowed against the soft coral of her dress.

No, if he'd known this woman before, he'd certainly remember.

"Well, then, I’m right on time." He probably wouldn't have ventured out at all on his first night back in Bedford Creek, but as Mitch's groomsman, he could hardly avoid the party given for Mitch and Anne, especially since it was at the Forrester place, right next door to his parents' empty house. Apparently one of the Forrester sisters was a member of the wedding. He couldn't pretend he hadn't gotten home for it. Someone would notice his car or the light in the window. That was one of the drawbacks he remembered of life in a small town. Someone noticed everything.

So he'd make a brief appearance, smile at everyone, and beat a quick retreat before too many questions were asked.

Nothing in that scenario included having a stranger look at him with such disapproval. He pushed down his annoyance and tried a smile. "You think I should have come early, Ms....?"

Her eyebrows went up in astonishment. "You don't know who I am?"

He riffled quickly through his mental file of high school friends. Trouble was, he hadn't come back to Pennsylvania often during college and medical school on the West Coast. He was much closer since he'd taken the residency at a Philadelphia hospital, but also much busier. And with his parents spending most of the year in Florida, there'd been little to bring him back. People had a way of changing when you didn't see them for years at a time.

"Well, let's see. You must be someone I went to school with, right?"

A dimple showed at the corner of her mouth, dissipating her frown. "In a way."

The smile encouraged him. She couldn't be that annoyed with him, even if he'd gotten the time wrong. Something about her made him think of Angela Forrester, his high school sweetheart. One of Angela's friends, maybe?

"No." Her amber eyes seemed to enjoy a secret laugh at his expense.

Something about her eyes triggered recognition. He brushed the auburn curls back from her cheek, exposing the hairline-thin white scar.

She'd fallen from the willow tree in the backyard when she was five. He'd been the first person there, and he'd held the hem of his T-shirt over the cut, convinced that at ten he was grown up enough to take care of her. That might have been the moment he'd decided to become a doctor.

"Rebecca." Now that he realized, of course it could be no one else. "Little Rebecca, all grown up."

She drew back casually from his touch. "People do, you know."

He shook his head. "It's impossible. You used to look like Orphan Annie, all frizzy red hair and big eyes."

Now she was beautiful. The idea stunned him. How could Angela's pesky kid sister look like this?

"I didn't mean..." He was thrown ridiculously off-balance. Of course Rebecca had grown up. She couldn't stay little forever.

"You expected me to look like a kid. Did you think nothing in Bedford Creek would change while you were gone, that we were all just waiting for your return? It's not Brigadoon, you know."

"Isn't it?" They'd done "Brigadoon" for their senior class play. Angela had been gorgeous in a tartan skirt. Somehow Bedford Creek had always had that same aura -- isolated, hidden by its mountains, remote from his busy urban life.

"Things do change. I grew up. Angela got engaged. You can't just walk back in and find everything the way you left it."

The edge in her voice startled him. Rebecca had been a quiet little tomboy, all skinny legs and sharp elbows. She'd tagged after him and Angela, always wanting to be just like them, until it nearly drove Angela crazy.

"I guess things have changed." He lifted an eyebrow. "Way I remember it, you'd no more have argued with anyone than you'd have flown off the roof."

She smiled, the flicker of antagonism disappearing, at least for the moment. "I think I did try to fly off the porch once, using Mom's tablecloth for a cape."

"So you did. Are you still a tomboy?" Teasing Rebecca felt like old times, and the tension he'd been carrying around for weeks seemed to slide away. "Still falling out of willow trees?"

"Not anymore." Her chin lifted, perhaps with pride. "I'm a physician's assistant now. I work with Dr. Overton at the clinic."

The mention of his old mentor's name jolted something inside him. He had to see Doc Overton soon, but he already dreaded the encounter. Doc would have to be told what had happened to his fellowship. And Doc would have expectations of his own about Brett's future. "How is Doc?"

A troubled look crossed her face, dimming the sparkle of her eyes. "Getting old." She shook her head, as if shaking away something she didn't want to think about. "He'll be excited to see you. You haven't been in touch enough." She pinned him down with a straightforward look he remembered from the little girl she'd been. "You are here to stay, aren't you?"

Something tightened painfully inside him. Stay? Was that the only choice left to him? He rejected that quickly. With the end of his residency he'd lost his student apartment, so coming to Bedford Creek was the logical thing to do. But as soon as he found a new fellowship, he'd be gone.

When he didn't answer, Rebecca's intent gaze seemed to bore into his very soul. "That is why you've come back, isn't it? To take over the clinic from Doc, the way he's always planned?"

Coming to the Forresters' had been a mistake. He should have waited to read about the party on the social page of The Chronicle. What gave Rebecca the right to put him on the spot?

"Then why are you in town?" The edge was back in her voice.

For an instant he wanted to spill the whole story and get it off his chest. The thought horrified him. Nobody needed to know Brett Elliot, M.D., once the pride of Bedford Creek High School, had sacrificed the prestigious fellowship his mother had probably bragged about in every letter to her friends.

"Just on a break." He took a step back. It was time little Rebecca stopped interrogating him -- time he congratulated Mitch and Anne and then got out of here.

"A break?" She stared at him in disbelief. "What do you mean, a break? Doc's been waiting for you to come back."

He fought down a wave of anger. "That's between Doc and me."

She didn't seem to agree. "You have an obligation here, remember? A debt to pay."

Her challenge stung, reminding him of too much he wasn't ready to face yet. "My debts don't concern you, Rebecca."

"Everything about the clinic concerns me." She shot the words back at him. They were suddenly on opposite sides of a chasm, glaring at each other.

"Look, if you think..." The rest of that sentence vanished when someone bolted through the archway from the livingroom and flung herself into his arms.

Memories flooded him. The same perfume, the same clinging hands, the same soft voice chattering a mile a minute. Angela.

"Brett! I thought I heard your voice, but I didn't believe it. I'm so glad to see you, I just can't believe you're here." She threw her arms around his neck, half-choking him.

He tried to disentangle himself, but Angela's words had pierced the din in the living room. In a moment he was surrounded.

He wasn't going to escape the party in the foreseeable future. And over Angela's head he saw Rebecca waiting, apparently ready to demand the answers he didn't intend to give.