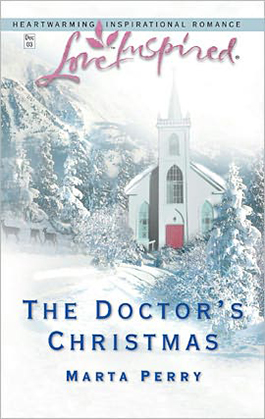 God could not have chosen a worse time to send Dr. Grant Hardesty to Button Gap. Three abandoned children were depending on Maggie Davis's clandestine care until their mother returned. Maggie didn't think she could trust the by-the-book city doctor with her secret, until she got a glimpse into his soul...and God's mysterious ways became as clear as a starry night.

Maggie knew her trust was well placed as this once-aloof doctor opened his heart to the children...and her. But as Grant's time in Button Gap ended, she prayed for one more miracle. Could God make this man who seemed to have everything recognize that it all meant nothing without Maggie's love?

Grant Hardesty strode into the clinic's waiting room. Empty, but a child's wail issued from an exam room beyond the counter. He tossed his jacket onto a chair. Whether he wanted it or not, his stint as a volunteer doctor at the isolated mountain clinic was apparently starting right now.

The exam room door stood open. A kid of about nine or ten sat crying on the table, while his mother stood next to him, wringing her hands. A woman who must be the clinic's nurse struggled to pull the boy's hands away from the cut on his face without knocking over the suture tray.

He gave a cursory knock on the door frame, barely breaking his stride. "I'm Grant Hardesty. It looks as if you have a patient for me already." He headed for the sink, folding back his sleeves with a nod to the nurse. "I'll do the suturing. You settle him down."

The woman swung toward him, moving in front of the child protectively. "What are you talking about? Who are you?"

Grant did a quick assessment. Jeans, boots, a flannel shirt over a white tee. What had happened to lab coats and name badges? The woman had thick glossy dark hair, short and straight, a pair of startled dark eyes, and a stubborn chin. She did not look welcoming.

"I'm Dr. Hardesty," he repeated. He started to take her place next to the patient, but she didn't move. "From Volunteer Doctors. They must have informed you I was coming."

The surprise in her face told him the answer to that one. She hadn't expected him. Some bureaucrat must have fouled up.

The woman's surprise was accompanied by something else. Before he could analyze what, the kid wailed again, the mother echoing his cry.

"Look, we can do the welcome ceremony later." Unlikely. "Let's get the patient taken care of first."

He didn't have to analyze her reaction to that suggestion. Anger and indignation battled for supremacy.

"If you think I'll turn my patient over to you without knowing more than that, you must be crazy." Western Maryland accents were softer, lazier than Baltimorese, but hers had sharpened with anger.

The mother stifled a sob. "Maggie, if he's a doctor-"

"We don't know that." She darted an annoyed glance at the woman. "Somebody walks in off the street and you want him to treat Tommy without knowing a thing about him just because he claims to be a doctor? I don't think so."

Maybe he should appreciate her caution, but he just wanted to cross off one day from his sentence here. Grant yanked his hospital ID from his pocket and tossed it to her. "Grant Hardesty, MD. Okay?"

She let go of the kid to catch it, and the boy made a determined lunge to escape. Grant caught him, plopping him back on the table and getting a kick in the stomach for his trouble.

He clenched his teeth to keep back a groan. "Satisfied? Let's get this done. I repeat: you hold, I suture."

She frowned at his ID for another moment, then gave in with a reluctant nod.

"Gloves are on the tray." She took the kid's hands. "Come on, Tommy. The new doctor will take good care of you."

She probably didn't actually mean that reassurance, but at least she seemed done arguing.

He snapped on the gloves and checked the tray. He'd dealt with antagonistic medical personnel before. He could handle this one, even if she did dress more like a female lumberjack than a nurse.

He sensed her gaze assessing his every move even as she talked to the kid, distracting him while he cleaned up the boy's forehead. The cut was nothing too drastic-no doubt she could have handled it herself, but that was why he was here. Well, ostensibly, anyway.

He half-listened to her chiding the kid about crossing some creek on a log. He'd committed himself to tending the medical needs of this western Maryland mountain county for the next month. It wasn't what he'd intended to do after completing his residency, but the eventual reward would be worthwhile.

So here he was, lost in the wilderness until Christmas. He suppressed the edge that always entered his mind at the thought of the holiday.

At least, this job would get him away from his mother's round of society parties. That was something to appreciate, anyway.

The boy had stopped wiggling, listening intently as the nurse-what had the mother called her? Maggie, that was it. As Maggie told him a story about encountering a bear in the woods. Fanciful, but it kept him quiet.

"There you are." He stood back, pleased with the neat stitches. He hadn't lost his touch. "The nurse will give you a sheet of follow-up instructions."

He went to the sink to wash up. Before he treated any more patients, he'd get a lab coat out of his bag. It didn't look as if he could count on the free clinic to provide them.

He heard the soft murmur of the nurse's voice as she took them to the outer office, explaining the instructions to the mother. Nurse Maggie seemed to have all the kindness in the world for her patient. None, obviously, for him.

Well, that was too bad. Presumably she was used to working with different doctors, since they came in and out of this place through a revolving door. She'd just have to adjust to his way of doing things.

If he stayed. The thought that had recurred since he left Baltimore came again. He didn't have to stay.

The outer door had closed. He went back to the reception area-pale green walls that needed a new paint job, posters urging flu shots and well baby checkups, a row of metal folding chairs. Maggie whatever-her-name-was stood at the desk in the little cubbyhole behind the counter, frowning down at an envelope in her hand.

"Let's start over again." He leaned against the doorjamb, giving her what he hoped was a friendly smile. "I'm Grant Hardesty, volunteer doctor of the month."

The woman's chocolate-colored eyes seemed made for smiling, but they held a cool reserve when she looked at him. "I'm Maggie Davis. Permanent nurse." She laid a faint stress on the word.

"Nice to meet you, Maggie." It hadn't been so far, but things might improve. He slid his jacket back on.

She lifted the envelope she held. "Your paperwork arrived the same day you did, Doctor. That's the way the mail usually functions up here in the mountains. I didn't think they'd send us a new doctor until after the holidays."

"You got lucky," he said lightly.

"Yes." She looked him over, seeming to estimate the cost of his leather jacket and Italian loafers. "Now that you've seen what Button Gap is like, do you still intend to stay?"

There was a challenge in the words that he didn't miss. For whatever reason, Maggie Davis either didn't want him to stay or didn't think he would. Or maybe both.

Well, she was wrong. With faint surprise, he realized that at some point in the past half hour, he'd made a decision.

He lifted an eyebrow, smiling slightly. "Sorry to disappoint you, Ms. Davis. I fully intend to stay."