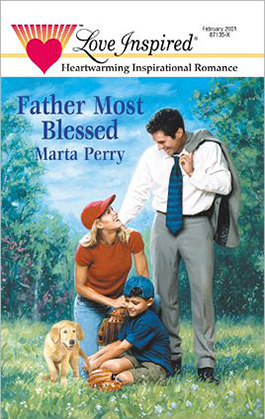 COULD SHE GO HOME AGAIN?

Paula Hansen had her doubts about returning to Bedford Creek and Alex Caine—the man she’d once loved—but she knew she couldn’t deny her aunt’s request. So she’d turned to God for guidance, and heard His answer loud and clear. She needed to put memories of their past aside and help bring this proudly independent father and his troubled son closer together….

Burdened with saving his family’s company, Alex soon discovered Paula was the answer to his prayers. And now that he’d been blessed with a second chance, he’d do anything to make sure that this time, Paula would be in his life forever!

Join the men of Hometown Heroes—Childhood friends who uncover love in their own backyards!

A man who lived in a twenty-room house ought to be able to have silence when he wanted it. Alex Caine tossed his pen on the library desk and stalked to the center hallway of the Italianate mansion that had been home to the Caine family for three generations. The noise that had disrupted his work on a crucial business deal came from beyond the swinging door to the servants' area.

Frowning, he headed toward the sound, his footsteps sharp on the marble floor, and pushed through the door to the rear of the house. He'd told his ailing housekeeper to rest this afternoon, so there should have been no sound at all to disturb his concentration. But Maida Hansen, having taken care of him since the day his mother died when he was six, tended to ignore any orders she didn't want to follow.

Well, in this case she was going to listen. If he didn't find the right words for this delicate negotiation, Caine Industries might not survive for another generation. There might be no company at all to leave his son.

He winced. What would his grandfather or his father have said to that? They'd assumed they were founding a dynasty to last a hundred years. They wouldn't look kindly on the man who presided over its demise.

The noise came from the pantry, down the hall from the kitchen. He seized the doorknob and yanked.

The figure balanced precariously on the step stool wasn't Maida. Maida had never in her life worn blue jeans or a sweatshirt proclaiming her World's Greatest Teacher. His heart stopped, and he looked at the woman he had thought he'd never see again.

She spun at the sound of his voice, wobbled, and overbalanced. Her arms waved wildly to regain control, but it was too late. The stepstool toppled, sending her flying toward him. Pans clattered to the floor. In an instant his arms had closed around Paula Hansen.

The breath went out of him. Carefully he set her on her feet and stepped back, clamping down on the treacherous rush of feelings. Paula -- here in his house again, looking up at him with what might have been embarrassment in her sea-green eyes.

With an effort he schooled his face to polite unconcern and found his voice. "Paula. I didn't expect to find you here. Maida didn't tell me you were coming."

Maida's time outside her duties was her own, and she was perfectly free to have her niece stay at the housekeeper's cottage whenever she wanted to. But in the almost two years since the plane crash, since what had happened between them, Paula hadn't returned to Bedford Creek.

"She didn't tell you?" Surprise filled Paula's expressive face. She tried to mask it, turning away to right the step stool.

"No, she didn't." If he'd known Paula was on the estate, he wouldn't have betrayed shock at the sight of her. In fact, he'd probably have found a way to avoid seeing her at all.

"But I thought she..." Paula stopped, seeming to edit whatever she'd been about to say. "My school just got out for the summer yesterday, so I'm on vacation now." Again she stopped, and again he had the sense of things left unsaid.

She'd been on vacation two years ago, when she'd come to Pennsylvania to spend the summer taking care of his son. It had seemed the perfect solution. He had needed someone reliable to care for Jason until kindergarten started in the fall. His housekeeper's niece needed a summer job. Neither of them had anticipated anything else.

The June sunlight, slanting through the small panes of the pantry window, burnished the honey blond of her hair. Her hair was shorter now than the last time he'd seen her, and it fell in unruly curls around her face. Her green eyes still reflected glints of gold, and that vulnerable mouth and stubborn chin hadn't changed.

Tension jagged along his nerves as images of the last time he'd seen her invaded his mind-- lightning splitting the sky outside the small plane; the brief hope the pilot would manage to land, shattered when the plane cartwheeled and flames rushed toward him; Paula, several rows ahead, trapped in a mass of twisted metal. If an unexpected business trip hadn't put him on the daily commuter flight the same day that Paula was leaving to go home, what might have happened? Would someone else have pulled her from the jammed seat to safety?

"Is something wrong?" She pulled her sweatshirt sleeves down, frowning. "You don't mind that I'm here, do you?"

"Of course not. I'm just surprised." He tried for a coolness he didn't feel. "It didn't bother you, flying back into Bedford Creek again?"

"No." She shook her head, then smiled ruefully. "I suppose it might have, if I'd tried to do it. I drove up from Baltimore."

Her admission of vulnerability startled him. The Paula he remembered had been proud of her self-reliance and determined not to accept help from anyone. Even after the accident, when he'd awakened in the hospital and learned her family had taken her home to Baltimore for medical care, his offer of financial help had been quickly refused.

"Driving instead of flying sounds reasonable to me," he said. "I don't enjoy getting on a plane now, either."

His own admission shocked him even more. Alexander Caine didn't admit weakness, not to anyone. His father had trained that out of him when he was about his own son's age.

"I haven't been on a plane since . . . " Paula's gaze flickered away from the scar that accented Alex's cheekbone.

His mouth tightened as he read the reaction he should have gotten used to by now. "The plane crash," he finished for her, his tone dry. "You can say the words, you know." He didn't need or want her pity.

"The drive up wasn't bad, just long." She seemed determined to ignore his reference to the crash. She stared at the rows of shelves with their seldom-used dishes as if she really didn‚t see them. Then her gaze shifted to him. "As I said, I'm on vacation, so I was free to come when Aunt Maida needed me." Her expression turned challenging. "You have noticed she's in pain lately, haven't you?"

He stiffened at the implication of neglect in her pointed question. Of course he felt responsible for the woman who'd cared for his family all these years. But it wasn't Paula Hansen's place to question him.

"I've asked her repeatedly about her health," he said. "She keeps insisting she's fine."

She lifted her eyebrows, her gaze turning skeptical. Paula's face had always shown her emotions so clearly. A picture flashed into his mind of her lips close to his, her eyes soft.

No. He pushed the errant thought away. Don't go there.

"Aunt Maida always insists she's fine. But you must have noticed something."

"She's been tired and limping more lately." He reached behind him for the door, hoping he didn't sound defensive. He was wasting time in this futile discussion, time he didn't have to spare. "I told her to take it easy this afternoon. She does too much." He glanced at the pans scattered on the worn linoleum. "Instead she seems to have enlisted you as assistant housekeeper."

Her chin came up at that, as if it were an insult. "I'm glad to help my aunt."

The last time she'd been here, it had been for her brief job as Jason's nanny. Alex tried again to ignore the flood of memories of that time-- the laughter and warmth she'd brought to this house, her face turned toward his in the moonlight, the moment he'd forgotten himself and kissed her.

Enough. He'd gotten through the remainder of her stay in Bedford Creek by pretending that kiss had never happened. Paula was probably as eager as he was to avoid the subject.

"It isn't just rest she needs." She stared at him, a question in her green eyes. "You really don't know, do you?"

"Know what?" He couldn't erase the irritation from his tone. "What are you driving at, Paula? I don't have time for guessing games."

Her eyes flashed. "She can't put it off any longer. Aunt Maida has to have hip replacement surgery."

Surgery. The implications staggered him. Maida, the rock on which his home life depended, needed surgery. He fought past a wave of guilt that he hadn't guessed what was going on.

"No, I didn't know." He returned Paula's frown. "I wish Maida had told me, but if she didn't want to, that was her right."

"She didn't tell you because she didn't want you to worry."

Paula clearly didn't consider protecting him from worry a priority. Antagonism battled the attraction he felt just looking at her. Maybe it was a good thing she annoyed him so much. It reminded him not to let that attraction get out of control, as it had once before.

"That's ridiculous," he said shortly. "If she needs the operation now, she has to have it. There's no question of that."

Even as he frowned at Paula, his mind raced from one responsibility to another--his son, the factory, the business deal that might save them. His stomach clenched at the thought of the Swiss firm's representative, due to visit any day now. He'd expect to be entertained in Alex's home. How could he swing that without Maida's calm, efficient management?

"My aunt knows this is a bad time for you. That's probably why she hasn't told you."

He sensed Paula's disapproval, although whether it was directed at him or her aunt, he didn't know. "I'll manage," he said curtly. "I'll have to find someone to fill in for her, that's all."

He knew when he said it how futile a hope that was. An isolated mountain village didn't boast an army of trained domestics ready for hiring. He'd be lucky to find anyone at all in the middle of the tourist season.

"It won't be easy to hire someone, will it?" She seemed to read his thoughts.

"No. I'm afraid Maida has spoiled us." He should have known things couldn't run so smoothly forever.

"Aunt Maida thinks she has a solution, if you'll go along with it."

He realized Paula was carefully not looking at him, and that fact sent up red flags of warning. "What is it?"

Paula took a deep breath and fixed him with a look that was half embarrassed, half defiant. "She wants you to hire me as her replacement."

For a long moment he could only stare at her. Paula, back in his house, cooking his meals, looking after his son. Given what had happened between them the last time she worked for him, he couldn't believe she'd be willing to try it again.

One thing he could believe, though. Having Paula Hansen in his house again wouldn't just be embarrassing. Having her there, seeing her every day-- no matter how desperately he needed help, that would be downright insane.