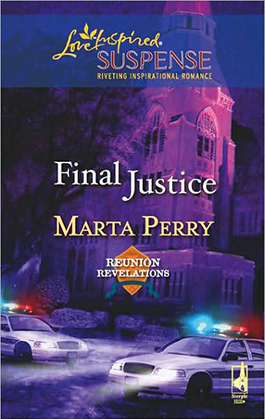 A DNA test revealed that Mason Grant had a nine-year-old daughter. He’d had no idea that the woman he’d loved and lost had been pregnant. Or that his own child had been in the custody of the woman’s murderer all these years.

Now the killer wanted Mason to pay—in more ways than one—for the return of the child. And for daring to find love with old friend Jennifer Pappas. But the only payback the cold-blooded murderer would get was final justice.

"In FINAL JUSTICE, former college classmates for a new bond and discover an attraction that helps them through difficult times and danger. Marta Perry writes very sensitive and generous characters that many will relate to."
— Romantic Times Bookreviews Rating 4.0

"As usual, Marta Perry has written a ripping good story of romance and suspense, full of twists and turns, and building to a terrifying ending. FINAL JUSTICE is one you won’t want to miss."
— Blue Mountain Backroads, Barbara Warren

"Ms. Perry has written a wonderful story about renewing your faith after failures and the twists life can take. This is also a deeply emotional story dealing with a child whose world is turned upside down. FINAL JUSTICE will please suspense readers, romance readers, and readers looking for a message within the story."
— Romance Readers Connection

He was about to meet the daughter he’d never known existed. He sat alone on a park bench, watching the spring sunshine filter through veils of Spanish moss and trying to make sense of the changes that had turned his life upside down.

Across the park, a father pushed his child on the rustic swing set. The little girl—four or five, maybe—laughed, her light voice floating toward him on the sultry air.

A cold hand seemed to squeeze his heart. What did he know about being a father? His own father certainly hadn’t set much of an example. In fact, if his father were alive today, he’d be quick to point out that this was just another opportunity for him to fail someone.

He couldn’t fail this child. She didn’t deserve that after all she’d been through. But he was probably the last person in the world who should be trusted with the responsibility for her.

He glanced at his watch. They’d come soon, and his life would change irrevocably.

But it already had, hadn’t it? It had started to change months ago, at the class reunion. He just hadn’t recognized it at the time.

The tenth reunion of Jennifer Pappas’s Magnolia College graduating class was in full swing, and she stood near the French doors that were open to the sultry southern evening, wondering what on earth had made her agree to come.

The Mossy Oak Inn, on the edge of the college campus, prided itself on elegant service, and the staff had outdone itself tonight. Discreet waiters circulated with trays of hot hors d’oeurves, while a string combo played a delicate counterpoint to the reliving of college memories. The scent of roses mingled with that of expensive perfume, almost dizzying in its impact.

She took an automatic step back from the exuberant greetings going on between two women who’d just, apparently, found each other after ten years and were determined to catch up on everything that had happened since. That was what she feared the most tonight—that seemingly innocuous question. What have you been doing since graduation?

How do I answer that, Father? She sought refuge in prayer, as she always did, focusing inward and shutting out the clamor of insistent voices rising above the chamber music. How could I talk about the daycare center I ran in Syracuse without mentioning how it ended?

A shudder touched her heart, and she steeled herself against the memories, locking them away. She wouldn’t dwell on the past. She’d started a new life. That was what this was all about, wasn’t it?

But she’d been back in Magnolia Falls for over a month now, and she still hadn’t found her balance. She was beginning to wonder if she ever would.

Her gaze touched Steff Kessler, class member and Alumni Director for Magnolia College. Steff had seemed eager to renew their college friendship, but even with Steff, she’d held back. How did you explain to anyone, let alone a friend, what it was like being arrested, charged, fingerprinted, accused of interfering with the custody of a child in your care?

No one here knew the truth except Pastor Rogers and her father. Dad kept insisting her life would be easier once she’d confided in a few friends, but she couldn’t do that. Panic flicked her on the raw. She couldn’t bear the possibility that they’d look at her with contempt.

The French door moved behind her, and someone stepped through. She turned, startled, and found herself face to face with Mason Grant.

“Mason.” Her heart twisted. Once she’d considered Mason one of her closest friends. Then, quite suddenly in the middle of their senior year, he’d shut her out, along with everyone else he’d been close to.

According to Steff, that was still true. Steff hadn’t expected him to show up tonight, even though he still lived in Magnolia Falls.

“Jennifer Pappas.” He looked as startled as she felt. “I haven’t seen you since—well, since graduation.”

“Ten years.” She managed a smile. “How many times do you suppose those words have been said tonight?”

That brought an answering smile to his face. “Too many, I suppose. And they’re still at it.” He glanced at the noisy crowd, seeming to search for familiar faces, giving her a moment to take a quick look at him.

Her first thought was that he hadn’t changed. Tall, lean, he still had the sinewy strength of a basketball player, evident even in the perfectly tailored tux he wore. He had regular features, dark blond hair that was always a little tousled despite his best efforts, hazel eyes—

And there she saw the difference.

Guarded, that was the only word that came to mind. Once they’d been dancing eyes, but now they hid secrets. Maybe others would be fooled by the cheerful façade, but she recognized the expression. It was one she saw daily in her mirror.

What is it, Mason? What’s changed you? What’s put those lines around your eyes and given that wary set to your mouth?

That was not a question she could ask, since it was one she wouldn’t or couldn’t answer herself.

He brought his attention back to her, his lips easing in a smile. “Actually, I heard from someone that you were back in town.”

“Probably at church.” Mason’s family had been long-time members of Magnolia Christian Church, although she hadn’t seen him at services there since she’d been back. “Pastor Rogers has hired me to run the church nursery school. I’ll also be doing the after-school program starting in September.”

His gaze evaded hers. “I must have heard from someone else. I haven’t been at church lately. The stores keep me too busy for much of anything but work.”

That would be the chain of sporting goods stores Mason had inherited when his father died during their senior year. Anyone might use that as an excuse. But Mason looked lost and alone somehow, just for an instant, before he veiled the emotion with a bland, cool mask.

Jennifer’s heart twisted. She wanted to reach out to him, to soothe the hurt she sensed in him just as she’d automatically run to comfort a crying child.

“Too busy for your faith? For your friends? What happened, Mason?” The words were out before she could censor them.

He looked startled, as well he might. “What do you mean? Nothing’s happened.”

She touched his sleeve, feeling hard muscle tense at her touch beneath the fine fabric of his tux, knowing it was a mistake to push but unable to resist her engrained need to help.

“We were good friends, before you walked away from all of us. Why did you do that?” She still remembered the pain, even though it had been ten years—the grief she felt at losing her friend and not knowing why.

Mason’s smile seemed frozen on his face. “Things happened, senior year, things none of us could control. Maybe you’ve forgotten I was the college pariah after losing the championship game for the team.”

She made a small sound of distress. “None of your friends blamed you for that, and anyone who did was an idiot. We wanted to help you then, but you shut us out. Can’t you let us make up for it now?”

“There’s no changing what’s gone.” He jerked a nod toward the chattering crowd. “You think any of them would really go back, even if they could? No matter how many fond memories they dredge up tonight, at some level they all know the reality. It’s far better for all of us to leave the past alone.”

She was too shocked by the bitterness in his voice to respond. Maybe he read that in her face, because for a moment she saw the old Mason behind the façade.

He clasped her hand in his, squeezing it gently. “Your heart always was too tender for your own good, Jennifer. But I’m glad you’re back, all the same.” He let her hand go slowly, almost reluctantly. “We both ought to circulate. I’m sure plenty of old friends are eager to greet you.”

And then he turned and slipped away into the crowd.