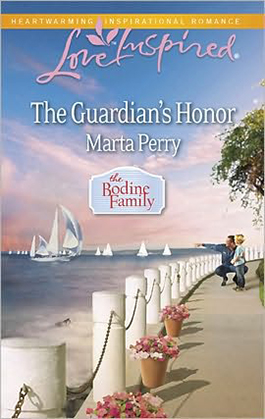 His Most Personal Mission

Coast Guard officer Adam Bodine finally finds his long-vanished great-uncle. But the secretive elderly man has adopted some new kin ... single mother Cathy Norwood and her disabled little boy. Adam is grateful when Cathy convinces his relative to reunite with the Bodines. Until he learns why she's so eager. Though his heartstrings are tugged by their plight, he knows he doesn't deserve them in his life - not with his past. Unless one big extended family can teach Lieutenant Bodine something about love and honor.

“What are you doing?” The woman’s voice was a soft Georgia drawl overlaid by a sharp edge of hostility.

Adam Bodine took a step back on the dusty lane and turned toward the woman with what he hoped was a disarming smile. “Just admiring your garden, ma’am.”

Actually, the garden was worthy of a second glance. By early September at the tail end of a hot, dry summer, most folks would find their tomato plants shriveled to a few leafless vines, but these still sported fat red tomatoes.

The woman rose from where she’d been kneeling, setting a basket of tomatoes and peppers on the ground, the movement giving him a better look at her.

She was younger than he’d thought in that first quick glance. A faded ball cap covered blond hair pulled back in a pony tail, its brim shielding her eyes so that he couldn’t see what color they were. Light, he thought. Her slim shoulders were stiff under a faded, oversized plaid shirt, giving the impression that she braced herself for something unpleasant. Was that habitual, or did his appearance account for it?

“These tomatoes are about ready to give up,” she said, still guarded. “Did you want something?”

He did, but it was far better if this woman didn’t know what had brought him to the ramshackle farm deep in the Georgia mountains. At least, not until he knew for sure he was in the right place.

“Just passing by,” He glanced back the winding lane that had brought him to what he hoped was the last stop on a long hunt. Please, Lord. “I don’t suppose you get many strangers up here.”

“No.” The tone said she didn’t want any, either. “Look, if you’re sellin’ something—“

A chuckle escaped him. “Do I look like a salesman?” He spread his hands, inviting her to assess him.

There wasn’t much he could do to make his six-foot frame less intimidating, but he tried to ease his military bearing and relax his face into the smile that his sister always said was at its most boyish when he was up to something. At least the jeans, t-shirt, and ball cap he wore were practically a uniform in this part of the world.

“Maybe not a salesman,” she conceded. “But you haven’t explained what you’re doing on a private road.” She sent a quick, maybe worried glance toward the peeling white farmhouse that seemed to doze in the afternoon heat. “Mr. Hawkins doesn’t like visitors.”

Mr. Hawkins. The formal address might mean she wasn’t a relative. A caregiver, maybe?

“Actually, I’m looking for someone. A man named Ned Bodine. Edward Bodine, to be exact.” He studied her as he said the words, looking for any sign of recognition.

The woman took the ball cap off, frowning as she wiped her forehead with the sleeve of the plaid shirt, leaving a streak of dirt she probably hadn’t intended. Her eyes were light, as he’d supposed, neither blue nor green but hazel, probably taking on the shade of whatever color she wore. That heart-shaped face might have been pretty if not for whatever it was that tightened it—worry, maybe, or just plain dislike of nosy strangers.

“Sorry,” she said. “I don’t believe I’ve ever heard the name. Now, if you’ll excuse me...” She gestured toward the garden.

“You’re sure?” Of course she might not know, even if she were a relative of his great-uncle. Ned Bodine had stayed missing for sixty-some years, which meant he probably kept his secrets well.

“That’s what I said, isn’t it?” She snapped the words at him, picking up the basket as if it were a shield.

So much for getting anything out of her. “In that case, I’d like to speak to Mr. Theodore Hawkins.”

She gave him a wary, suspicious stare. “Why?”

“Mrs.,” she corrected. “Mrs. Norwood.” She bit off the words, as if regretting giving him that much.

The name wasn’t the same, but that didn’t mean she couldn’t be related. She could be...let’s see, what was it? Second or third cousin, maybe?

“I know it seems odd, having a perfect stranger coming along and asking questions, but I do need to talk with Mr. Hawkins.”

“He’s resting right now. He always takes a rest in the afternoon. He’s not to be disturbed.”

The way she phrased that made it sound as it she took orders from the man. Probably not a relative, then, so he had to be stingy with what he told her. Gossip flew fast in country places, even though there wasn’t another house in sight.

“Look, I think he’d probably be willing to talk with me.” Doubt assailed him as he said the words. What made him think Ned Bodine wanted to be found after all these years? Still, all he could do was try. “Just tell him Adam Bodine wants to see him. Please.”

He glanced toward the house, hoping to see some sign of life. Nothing, but he noticed something he hadn’t before. A child played under the shade of a tall pine near the corner of the porch, running toy cars in the dirt.

“Your little boy?” he asked. Maybe an expression of interest in her child would ease the ice between them.

His words seemed to have the opposite effect. She moved, putting herself into position to block his view of the child.

“I told you. Mr. Hawkins is resting. He wouldn’t be able to help you anyway.”

“We won’t know that until we ask him, will we?” He put a little steel into the words. Obviously this Mrs. Norwood wasn’t going to fall victim to the notorious Bodine charm. “When can I see him?”

She clamped her lips together for a long moment. She could either give in, or she could threaten to call the sheriff on him. Which would it be?

Finally she gave a curt nod. “All right. Come back tonight around six.” She gave a pointed look from him to his car.

Nobody would say he couldn’t take a hint. “Thank you, ma’am. I’ll be back at six.”

She didn’t respond, bending again to her tomato plants as if he wasn’t there.

He gave the sleeping house a final glance. He’d be back. With any luck, this long search would end here.