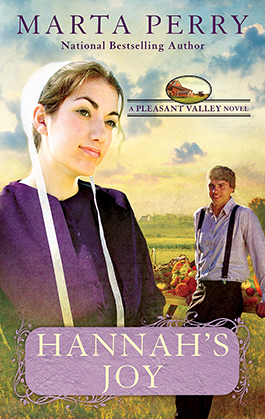 Returning to Pleasant Valley is giving Hannah Conroy a much-needed chance at a new life. But now she must discover her true place in the world …

Unexpected tragedy has left Hannah without her soldier husband and a home for her baby son, Jamie. Seeking refuge, she comes to live with her aunt in Pleasant Valley, a place she hasn’t seen since childhood, when her parents left the Mennonite faith. Working in her aunt’s bakery is a way for Hannah to get back on her feet, but she isn’t sure if she can live by tradition—or if she and Jamie should stay for good. She finds an unexpected, sympathetic listener in furniture maker William Brand. His stutter makes him feel like a permanent outsider in his Amish community, and he understands her loneliness.

Hannah is irresistibly drawn to the shy, caring William, and her education in speech therapy makes it natural for her to want to help him speak more easily. But how can she encourage his attention when she might someday leave Pleasant Valley, and when her father-in-law, a military officer, is scheming to take Jamie away from her? As William seeks the courage to stand up for the woman who believes in him, Hannah must decide where her true home lies—in the free, ever-changing world she knows, or in the simpler, loving community she’s found…

A man in Army fatigues stepped off the bus at the Pleasant Valley stop. Hannah Conroy clutched the stroller handle to keep from falling, fighting the irrational surge of joy that turned in an instant to ashes.

It wasn’t Travis. It was an unknown young soldier, moving into the welcoming arms of his family—mother holding him, fighting back tears, father standing stiffly as if to deny his emotions, a girl of about ten waving a welcome sign.

Not Travis. Travis had lain beneath a marker in Arlington National Cemetery for over a year. He wasn’t here on a warm September day in Pleasant Valley.

Two women in Plain dress stopped next to her on the sidewalk, their faces blurred by the tears she wouldn’t let fall. One reached out a tentative hand.

“Are you all right? You are Hannah, ain’t so? Paula Schatz’s niece?”

She nodded. She couldn’t cry. Jamie would be frightened if he saw his mother in tears. But he was almost asleep in the stroller, one chubby hand still grasping his toy dog.

“You’re going into the bakery, ja? Let us help you get the stroller inside.” The woman motioned to the other…a girl in her early teens, Hannah saw now…who pulled the door open, setting the bell jangling. Together they maneuvered the stroller inside Aunt Paula’s bakery.

“Thank you,” she said again. The grief and pain ebbed, leaving her as lost as a leaf in the wind.

“It’s nothing.” The woman patted her arm with a feather-light touch, the girl nodded, and they were gone.

Aunt Paula, as round and comforting as one of her own dumplings, glanced up from the customer she was serving, her eyes clouding when she saw Hannah’s face. By the time Hannah reached the kitchen door, Aunt Paula was there, wiping her hands on the white apron she wore over her traditional Old Order Mennonite dress, its tiny print faded from many washings.

“Hannah? Was ist letz?” Aunt Paula spoke English most of the time, but in moments of stress was apt to slip into Pennsylvania Dutch. “What’s wrong? I saw Leah Glick and her daughter helping you.”

“Nothing.” Hannah bent, the action hiding her face for a moment, and lifted Jamie from the stroller. He was relaxed and drowsy, a precious, heavy armload now at eighteen months. “I’m fine.”

She didn’t want Aunt Paula worrying about her. It was enough that her aunt had made a home here for her and Jamie.

But Hannah couldn’t stop herself from taking a glance at the window. The family, faces animated with love, moved toward a car.

Aunt Paula followed her gaze. “Ach, I see.” Her voice was soft. “I know. After your uncle passed, I’d see a man with wavy hair like his, or his way of walking, and my heart would stop, as if it reacted faster than my brain did.”

“It’s been over a year.” Hannah cradled Jamie close, and he snuggled his face into her shoulder, his soft breath against her neck. “I’m better. But sometimes—“

The bell jingled on the bakery door, and Aunt Paula turned to greet the man in Amish garb. Hannah had nearly forgotten, in all the years since she’d lived here as a child, the peculiar mix of Amish, horse-and-buggy Mennonite, black bumper Mennonite, and English that made Pleasant Valley so unique.

William Brand was Amish, and he worked with his cousin Caleb in the cabinetry shop down the street. Hannah had learned that much from him, but it had taken persistence. William stuttered, and like many stutterers, he took refuge in silence much of the time.

Banishing thoughts of the past, Hannah moved to the counter, smiling. William was silent enough already. She didn’t want him to think she was avoiding speaking to him.

He ducked his head in a nod. Tall for an Amish man, and broad-shouldered, he wore the traditional Amish black broadfall trousers with a blue shirt and suspenders, the usual straw hat on his head. In his mid-twenties, William was probably a year or two younger than she was, but his fresh color and the shyness in his blue eyes made him seem even younger. Next to him, she felt ancient.

And what did he make of her, with her denim skirt, pink lipstick, and curling ponytail? Did he find it odd that Paula Schatz had such a modern niece?

“H-H-Hannah,” he managed, as if determined to say her name.

Then he looked at her son, and his face softened. He held out a work-roughened hand, and Jamie latched onto it, saying something that might have been an attempt at William’s name.

Jamie shook his head vigorously, but the movement was interrupted by a huge yawn that showed every one of his baby teeth, and they both laughed.

Funny, how William’s stutter seemed to ease when he spoke to Jamie. Once, a lifetime ago, she’d planned to become a speech therapist, and her interest stirred.

“He just doesn’t want to admit he’s tired. I thought he was going to fall asleep in the stroller,” she said, reminding herself to speak naturally to William. Talking with a stutterer required more patience than many people had.

“That’s for sure.” She tickled Jamie’s belly, loving the way he chuckled, eyes crinkling.

Aunt Paula returned to the counter, carrying two coffees in foam cups and a white bag. “There you are, William, your usual coffee, just the way you and Caleb like it. And a couple of crullers to tide you over to lunch.”

He handed her the money. With another smile for Jamie, he went quickly out, perhaps relieved not to have to engage in any further conversation. His straw hat shielded his face from Hannah’s view as he passed the window.

She stood watching his tall figure for a moment, and then went to get Jamie’s plastic cup of milk from the small refrigerator behind the counter. She focused her mind on him, trying not to let it stray toward those moments on the sidewalk.

Aunt Paula leaned against the display case, seeming ready for a comfortable gossip. “I don’t know about always. You don’t remember the Brands from when you were growing up?”

She shook her head. “I was only eight when we left, after all.” She handed Jamie the cup.

Of course Aunt Paula would remember that. How could Paula forget when her beloved younger sister had up and left the community, left the church, left her family, and incidentally left behind all Hannah’s security?

“No reason you should, I guess,” Aunt Paula said. “Anyway, it’s a big family, and William is the youngest. His mamm and daad were both sickly off and on, and it seemed like William kind of got lost in the shuffle, what with his oldest brother, Isaac, taking over the farm and always barking orders at the younger ones. I’m not sure when the stuttering started, but it was before William went to school.”

Hannah nodded, feeling a pang of sympathy. William hadn’t had it easy. “That’s typical. It’s usually in those early years when a child is starting to talk. How did the family handle it? Did they get help for him?”

“Not that I know of.” Aunt Paula frowned. “I think the schoolteacher tried to help him, but seems like the other kinder were always impatient, finishing his sentences for him, acting like he was...well, slow.”

“I don’t think he’s that.” She’d seen quick understanding in William’s face in their few conversations, even when he didn’t speak.

“Ach, William’s bright enough, and the best thing that could have happened to him was going to work with his cousin Caleb in the shop. He’s got a gift with his hands, so Caleb says, and Caleb’s a master woodworker himself, so he’d know. The boy will maybe find a little respect for himself there.”

“Not a boy,” Hannah murmured, taking the cup from Jamie, who was nearly asleep on her shoulder. She rubbed his back, cherishing the feel of his small warm body against her.

“No, you’re right. He’s not.” Aunt Paula touched Jamie’s brown curls in a quick caress. “William seems younger than he is, no doubt because of the stutter.”

Hannah nodded, moving toward the stairs that led up to the apartment above the shop. She would put Jamie in his crib and—

“I’m nearly forgetting.” Aunt Paula’s voice lifted. “That’s what you were studying in college, wasn’t it? Before you got married, I mean?”

“Speech therapy.” That had been her only goal, until Travis came along.

But Travis had loved her. It had seemed meant, that they should love each other and get married and make a home for each other always.

Always hadn’t lasted very long. Just a few short years of moving from one Army base to another. She’d been pregnant when his unit shipped out to Afghanistan. Travis had never seen his son, and she’d quickly learned that a mother with a young child and an incomplete education had very little chance of making a home of any kind, even with the military’s death benefits.

“You could help William.” Aunt Paula, not able to follow Hannah’s thoughts, smiled broadly. “I don’t know why I didn’t think of that before. You can teach William, help him get over his stutter.”

“No, no, I couldn’t,” she said quickly. “I’m not qualified. I never finished, and besides—“

“Well, you’re as near to qualified as William is likely to get,” Aunt Paula said briskly. “It would be an act of charity to help him.” She said it as if that were the defining argument, as it probably was to anyone brought up Mennonite, accustomed as they were to the idea of service.

But Hannah hadn’t been Mennonite since she was a child, and as much as she’d like to help, her instincts told her it was a bad idea to get involved in William’s problems.

“Just think about it.” Aunt Paula patted her shoulder. “You’ll see I’m right. It would be good for you, too, to make use of your education.”

Hannah hesitated, but then she nodded. Agreeing to think about it was easy. Marshaling the arguments against it was more difficult.

Especially since she didn’t want to use the strongest one—that she intended to go back to the outside world as soon as she could swing it financially. The familiar worry settled on her, darkening the sunny day. How long could she go on staying here, accepting Aunt Paula’s home and her help, without her aunt expecting Hannah to commit to her way of life?