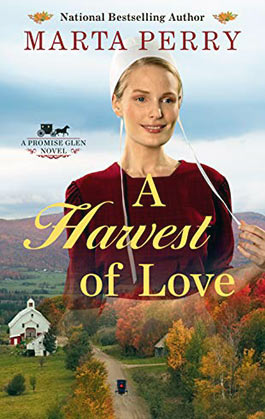 A determined widow and a single father learn that love is about taking chances and turning over new leaves in the quaint Amish community of Promise Glen, from national bestselling author Marta Perry.

When widowed shop owner Dinah Hershberger is unceremoniously charged with safely escorting an infant to his uncle, she finds herself torn. Jacob Miller is everything Dinah could want in a partner--he's kind, handsome, strong--and nothing she can ever have. As much as she yearns to help the new family adjust, each minute Dinah spends with Jacob and the baby leaves her heart more vulnerable and her head more certain that the secret she hides makes a future with the Miller men impossible.

Jacob has long admired Dinah for her strength and independence, but it's her generosity of spirit that tempts him like never before. With Dinah at his side, Jacob opens himself up to the daunting new world of fatherhood, but how can he pursue his feelings for her when his life is in such disarray? After the disappointments of her first marriage, she deserves better than what Jacob can offer.

But love has a surprise in store for these two troubled hearts, and happiness is within reach if only they can grasp it, making Promise Glen their own promised land.

Dinah Hershberger came to the end of the early morning rush at her bakery and coffee shop and let out a breath. If things continued to be this busy, she’d need some help. Maybe her young sister Lovina would be willing to work a few hours a week. The thought made her smile Lovina would liven up the morning hours—that was certain sure.

Brushing off the white apron that protected her the black dress she’d worn during the two years since Aaron’s death, she headed for the pantry at the rear of the shop. She’d need a few more muffin tins if she were to use up the abundance of zucchini from the garden in zucchini nut muffins. They were popular even with customers who’d never touch a zucchini any other way.

The pans she wanted proved to be on a high shelf. Standing on tiptoe to reach them, she managed to lose her grip and send the whole stack clattering to the floor, and her breath caught. Not because of the noise—because of the memory that sprang out at her, clawing at her heart.

She pressed her hand against her ribs, trying to ease her breathing back to normal. The memory of the grief and anger in Aaron’s face chilled her. He’d dashed a rack full of pans to the floor, letting the anger come to the surface. If only…

No. She wouldn’t let her mind travel back to that pain. But if only they could have grieved together instead of parting in anger that day…

Dinah stopped herself again. Gathering up the pans, she hurried back to the kitchen. Look at the time—she hadn’t yet taken his morning coffee to Jacob Miller, her landlord whose harness shop was only a swinging door away. Maybe this would be the morning when he’d stop trying to press money on her for the coffee and jelly donut that he claimed got him through the time until lunch. She owed Jacob so much more than her rent and the morning coffee. Without him, she’d have never been able to continue the business after Aaron’s death.

It took just a moment to pour the coffee and take a jelly donut from the glass-fronted cabinet. She preferred crullers herself, but Jacob certain sure had a sweet tooth. With the thick mug in one hand and a small plate with the donut in the other, she pushed through the swinging door.

The harness shop was fairly quiet, as it usually was this time of day. She inhaled the scents of leather and neatsfoot oil. With a blindfold on she’d know which shop she was in. She’d come here with her father when she’d been small, and it smelled and looked the same now, except that Jacob’s father sat at the heavy sewing machine where Jacob sat now.

Dinah walked toward him, thinking he hadn’t heard her. But before she reached him some sense must have alerted him. He slowed the needle and the heavy belt that extended below the floor stopped. Jacob turned to her with the wide grin that was so friendly folks couldn’t help returning it.

“Ach, I thought I smelled a jelly donut coming.” He reached the counter in a couple of long strides and relieved her of cup and plate.

“I’m not so sure jelly donuts have a smell once they’re cool,” she said. “Don’t you think it’s the coffee?”

He shook his head and then bit into the donut, raspberry jelly spurting out onto his chin. He wiped it away, smiling with satisfaction. “If I ever marry and grow a beard, I’ll have to be more careful of where the filling goes, ain’t so?”

“I’m sure you’ll manage.” The community had been wondering for years when Jacob would take the plunge into marriage. It certain sure wasn’t that the females weren’t attracted. Every girl in their rumspringa group had had a crush on Jacob, with his light brown hair, lively smile, and his broad shoulders. It seemed odd, when she thought about it, that she’d never succumbed, probably because the two families had lived next to each other for generations. Jacob was more like an extra brother to her than anything else.

He wasn’t the boy he’d been, of course. His shoulders were even broader now, probably from wrestling with the heavy harnesses all day long. And if his bright blue eyes sometimes had a tinge of sorrow and there were more lines around his firm mouth than there once were, that was normal enough, given the loss of both his parents within such a short time.

Jacob had had to take over the harness shop much earlier than anyone expected, but no one denied he was doing as fine a job as his father did. But then two years ago there was the shock and sorrow when his younger sister, Anna, had disappeared into the Englisch world, leaving Jacob with no one.

Anna hadn’t even hinted that she was leaving, and the first Jacob knew was seeing her empty bedroom and a note telling him not to try and find her.

He did try, of course, but Anna had managed to lose herself completely. Finally he’d come back home, settled into his work, and most of the time looked like a man content with his place in life. Most of the time, anyway.

The last bite of the donut disappeared, and he gave a sigh of satisfaction before diving into his coffee. She shook her head, smiling.

“I never saw anyone consume a donut faster than you. Another one?”

Jacob shook his head. “With the fall festival coming at us and four or five weddings as well, I’d best save myself or I’ll regret it.” He slapped his flat stomach.

“I don’t think you need to worry about that. You don’t look an ounce heavier than when you were side-sitter at our wedding.” As Aaron’s friend, he’d been seated next to Aaron on that day. They’d all been so happy then.

That reference to his empty house surprised her. He seldom let anyone see that side of his life. Rallying, she shook her head. “Don’t tell me your cousin Sarah and all the rest of them don’t keep you supplied with home cooking, because I won’t believe it. Besides, my mamm is feeding you half the time anyway.”

Sarah was Jacob’s cousin and one of Dinah’s closest friends. She had been married in the spring to the man she loved, becoming the devoted mother of twin boys. And now Dorcas Beiler, the third of their circle of rumspringa friends, would marry her Thomas in one of the flurry of fall weddings coming up.

Jacob smiled again at the reference to his cousin Sarah. “She sent Noah over with two shoofly pies first thing this morning. Just in case I didn’t have enough for breakfast.”

The sound of the telephone from her shop interrupted her. Shaking her head at the money in his outstretched hand, she rushed back through the swinging door and snatched up the phone, catching her breath.

“Hershberger’s Bakery. How may I help you?”

The voice sounded familiar, but then she realized, and it was like a roll of thunder on a sunny day. “Anna? Anna Miller?” She gasped. “Where are you?”

“You want your bruder.” Excitement coursed through her. “I’ll run and get him.”

“Your brother…” she tried again.

“Not now. You. Please.” Anna’s voice wavered on the last word, and Dinah’s heart melted.

“I’ll do anything to help. You know that.”

“Gut. I want you to get the bus to Williamsport this afternoon. You still close the shop on Tuesday afternoons, don’t you?”

“Yah, but…Williamsport?” The city was a fairly long bus ride, and one she’d made only a few times in her life. “Why Williamsport?”

“I’ll explain when I see you. Just come, Dinah. I’ll meet you at the bus station. Today. Don’t let me down.”

She wanted to argue, wanted to say that Jacob would be better able to help than she would. But she sensed that Anna’s mind was made up.

“Yah, all right. I’ll be there.” She’d tell Jacob. Jacob would know what to do for his sister.

“Denke. I knew I could count on you.” There was a slight paused before she went on. “Just one thing—don’t tell Jacob.”

“Don’t tell him! Not now, anyway. Afterwards you can tell him whatever you want, but I have to see you first. Promise me. Promise me or none of you will ever hear from me again.” Her voice was demanding, shrill, and Dinah gripped the receiver tightly.

She didn’t want to keep anything from Jacob, but it seemed she had no choice. She knew Jacob’s headstrong little sister about as well as he did. She knew Anna meant it.

“Gut.” She sounded relieved. “I’ll meet you at the bus station.”

Before Dinah could say a word, Anna hung up. Dinah stood there, staring at the buzzing receiver. She ought to tell Jacob, but how could she? If she didn’t, he’d be angry, and he’d have the right to be.

But she’d promised, because if she hadn’t, she’d have lost Anna completely. Jacob would have to understand. He’d know, as surely as she did, that she had to help his lost sister, even if it meant keeping a secret from him.

"With characteristic heart and respect for Amish culture, Perry’s third Promise Glen romance (after A Springtime Heart) offers a sweet story of love and family. Widow Dinah Hershberger is living with her large, boisterous family and happily running a small coffee shop when Anna Miller, a young formerly Amish woman who “jumped the fence” into the English world, comes to her for help–with a caveat: Dinah can’t tell Anna’s brother, Jacob, that they’re meeting. But when the favor turns out to involve taking in Anna’s six-month old baby boy, Isaac, Jacob and Dinah come together to take care of him and keep him safe when his no-good father comes looking for him—even as they fight their mutual attraction. The immersive narrative draws readers into the unexpected intricacies of Amish society, particularly delving into Dinah’s complicated relationship with her late husband. Through lovingly detailed characterization, Perry crafts a tale of hope built on a solid foundation of family unity. Amish romance fans will find this hits the spot."