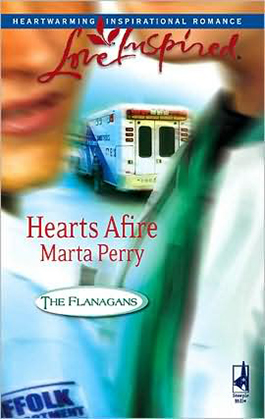 Firefighter paramedic Terry Flanagan saw her clinic for migrant farm workers as the perfect way to make a difference. But when Dr. Jacob Landsdowne was assigned to oversee her project, she wondered if her dreams would go up in smoke

Two years ago a tragedy had touched both their lives and almost destroyed Jacob's career. Now he was intent on rebuilding his reputation, and Terry's clinic was an unwanted distraction. Yet, with the well-being of women and children hanging in the balance, maybe it was time Jacob put aside his trust in himself…and turn to God.

Terry Flanagan flashed a penlight in the young boy's eyes and then smiled reassuringly at the teenage sister who was riding with them in the rig on the trip to the hospital.

"You can hit the siren," she called through the narrow doorway to her partner. Jeff Erhart was driving the unit this run. They had an unspoken agreement that she'd administer care when the patient was a small child. With three young kids of his own, Jeff found a hurt child tough to face.

The sister's dark gaze focused on Terry. "Why did you tell him to start the siren? Is Juan worse? Tell me!"

"He's going to be fine, Manuela." She'd agreed to take the sister in the unit because she was the only family member who spoke English. "You have to stay calm, remember?" Naturally it was scary for Manuela to see her little brother immobilized on a backboard, an IV running into his arm.

The girl swallowed hard, nodding. With her dark hair pulled back in braids and her skin innocent of makeup, Manuela didn't look the sixteen years she claimed to be

Possibly she was sixteen only because that was the minimum age for migrant farmworkers to be in the fields. The fertile farmlands and orchards that surrounded the small city of Suffolk in southern Pennsylvania were a magnet for busloads of migrant farm-workers, most from Mexico, who visited the area for weeks at a time. They rarely intersected with the local community except in an emergency, like this one.

"Yes, he will." Terry lifted the gauze pad slightly. The bleeding had slowed, but the edges of the cut gaped.

The child looked up at her with such simple trust that her stomach clenched. Lord, I haven't forgotten anything, have I? Be with this child, and guide my hands and my decisions.

She ticked over the steps of care as the unit hit the busy streets of Suffolk and slowed. She'd been over them already, but somehow she couldn't help doing it again. And again.

She knew why. It had been two years, but she still heard that accusing voice at moments like this, telling her that she was incompetent, that she--

No. She wouldn't go there. She'd turn the self-doubt over to God, as she'd done so many times before, and she'd close the door on that cold voice. The wail of the siren, the well-equipped emergency unit, the trim khaki pants and navy shirt with the word Paramedic emblazoned on the back--all those things assured her of who she was.

She smiled at the girl again, seeing the strain in her young face. "How did your brother get hurt? Can you tell me that?"

"He shouldn't have been there." The words burst out.

The child's fingers closed over hers, as if he understood what she was saying. A look flashed between brother and sister, too quickly for Terry to be sure what it meant. A warning? Perhaps.

She could think of only one ending to what Manuela had started to say. "Was Juan working in the field?" It was illegal for a child so young to work in the fields--everyone knew that, even those who managed to ignore the migrant workers in their midst every summer and fall.

Alarm filled the girl's eyes. "I didn't say that. You can't tell anyone I said that!

The boy, catching his sister's emotion, clutched her hand tightly and murmured something in Spanish. His eyes were huge in his pinched, pale face.

Compunction flooded Terry. She couldn't let the child become upset. "It's okay," she said, patting him gently. "Manuela, tell your brother everything is okay. I misunderstood, that's all."

Manuela nodded, bending over her brother, saying something in a soft voice. Terry watched, frowning. Something was going on there--something the girl didn't want her to pursue.

She glanced out the window. They were making the turn into the hospital driveway. This wasn't over. Once they were inside, she'd find out how the child had been injured, one way or another.

Jeff cut the siren and pulled to a stop. By the time she'd opened the back doors, he was there to help her slide the stretcher smoothly out.

They rolled boy and stretcher quickly through the automatic doors and into the hands of the waiting E.R. team.

Terry flashed a grin at Harriet Conway. With her brown hair pulled back and her oversized glasses, Harriet might look severe, but Terry knew and respected her. The hospital had been afloat with rumors about the new head of emergency medicine, but no one seemed to know yet who it was. All they knew was that the new appointment probably meant change, and nobody liked change.

She reported quickly, in the shorthand that developed between people who liked and trusted each other. Harriet nodded, clipping orders as they wheeled the boy toward a treatment room. This was usually the paramedic's cue to stay behind, unless the E.R. was shorthanded, but Terry was reluctant.

She bent over the child. "This is Dr. Conway, Juan. She's going to take good care of you."

She looked around for Manuela, and found the girl near the door, her arms around her mother. Two men stood awkwardly to the side, clearly uncomfortable with the woman's tears. One, the father, turned a hat in work-worn hands, the knees of his work pants caked with mud from kneeling in the tomato field.

The other man was the crew chief, Mel Jordan. He'd driven Mr. and Mrs. Ortiz. He'd know if Juan had been working in the field when he was injured, but he wouldn't want to admit it.

Manuela came back to the stretcher in a rush, repeating Terry's words to her little brother. Taking in the situation, Harriet jerked her head toward the exam room.

Good. Terry pushed the stretcher through the swinging door. Because she didn't intend to leave until she knew what had happened to the child.

The next few minutes had to be as difficult for the sister as they were for the patient, but Manuela hung in there like a trouper, singing to Juan and teasing a smile out of him.

Finally the wound was cleaned, the stitches in, and Harriet straightened with a smile. "Okay, good job, young man. You're going to be fine, but you be more careful next time."

Manuela translated, and Juan managed another smile. Harriet headed for the door. "I'll send the parents in now. Thanks, Terry."

This was probably her only chance to find out what had really happened at the camp. She leaned across the bed to clasp Manuela's hand
"How was your brother hurt? What happened to him?" Manuela's eyes widened. "I don't understand."

She bit back frustration. "I think you do. I want to know how your little brother cut his head. Was he working in the field?"

"What are you trying to pull?"

Terry swung around. The crew chief stood in the door, Dr. Conway and the anxious parents behind him.

"No kid works in the field. It's against the law. You think I don't know that?" Inimical eyes in a puffy, flushed face glared at her. Jordan had the look of a man who drank too much, ate unwisely and would clog his arteries by fifty if he had his way.

Dr. Conway pushed past him, letting the parents sidle into the room with her. "What's up, Terry? Is there some question about how the boy was hurt?"

"I'd like to be sure." Ignoring the crew chief, she focused on Manuela, who was talking to her parents.

"Manuela, what was your little brother doing when he was hurt?"

Manuela's father said something short and staccato in Spanish, his dark eyes opaque, giving away nothing. How much of this had he understood? Why hadn't she taken Spanish in high school, instead of the German for which she'd never found a use?
There was a flash of rebellion in Manuela's face. Then she looked down, eyes masked by long, dark lashes

"He was playing. He fell and hit his head on a rock. That's all.

She was lying, Terry was sure of it. "When we were in the ambulance, you said--"

"The girl answered you." The crew chief shoved his bulky figure between Terry and the girl. "Let's get going." He added something in Spanish, and the father bent to pick up the boy.

"Wait a minute.You can't leave yet." They were going to walk out, and once that happened, she'd have no chance to get to the truth, no chance to fix things for that hurt child

"We're going, and you can't keep the kid here." The mother, frightened, burst into speech. Her husband and Manuela tried to soothe her. The boy began to cry

Terry glanced to Dr. Conway in a silent plea for backup. But Harriet was looking past her, toward the open door of the exam room.

"What's the problem here?" An incisive voice cut through the babble of voices. "This is a hospital, people."

"The new E.R. chief," Harriet murmured to Terry, the faintest flicker of an eyelid conveying a warning

Terry didn't need the warning. She knew who was there even before her mind had processed the information, probably because that voice had already seared her soul. Slowly she turned

She hadn't imagined it. Dr. Jacob Landsdowne stood glaring at her. Six feet of frost with icicle eyes, some wit at Philadelphia General had once called him. It still fit.

He gave no sign that he recognized her, though he must. She hadn't changed in two years, except to gain about ten years of experience. Those icy blue eyes touched her and dismissed her as he focused on Harriet.

Harriet took her time consulting the chart in her hand before answering him. Terry knew her friend well enough to know that was deliberate--Harriet letting him know this was her turf.

Well, good. Harriet would need every ounce of confidence she possessed to hold her own against Jake Landsdowne

Harriet gave him a quick précis of Juan's condition and treatment, giving Terry the chance to take a breath.

Steady. Don't panic.You haven't done anything wrong. "The paramedic questions how the child was injured," Harriet concluded. "I was about to pursue that when you came in." She nodded.