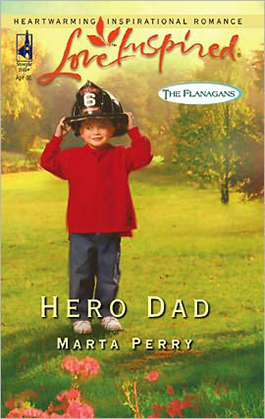 Life was so much safer at a remove, or at least so Julie Alexander thought. Her photojournalist job allowed her to view life through her camera lens, and it would help her learn if a man she'd never met was a good father to her late half-sister's child. But Julie's efforts to be a detached observer were challenged by firefighter Seth Flanagan and his warmhearted family, and her detachment was completely shattered by her unexpected love for three-year-old Davy. Yet Julie wasn't the only one facing issues; the still-grieving Seth made it clear that love didn't feature in his future plans. Could God's love build a bridge to connect the two?

She was not afraid. Julie Alexander paused in front of the trim brick firehouse, clutching her camera bag as if it were a lifeline. She wasn't afraid to go inside and risk confronting the man who had the power to break her heart.

No. The denial was instant and automatic. She didn't have to risk anything. As long as Seth Flanagan didn't know who she was, she had nothing to fear.

For God has not given us a spirit of fear-

The promise ought to be familiar to her. She had to rely on it often enough, and she would now.

The red brick of the building in front of her looked mellow in the late September sunshine, like so many of the century-old brick buildings she'd seen in this small Pennsylvania city. As she moved, an orangey-red leaf from one of the maples that lined the street fluttered past her shoulder. It clung for a moment to the camera bag and then dropped at her feet. Her mind automatically began to compose a picture.

But there would be no hiding behind the camera lens today, no matter how much she might wish it. She stepped over the leaf, pushed open the door and stepped into the cavernous interior of the firehouse.

Three men leaned against a fire truck, their strong bodies forming a frame around the gold letters on its side: Suffolk Fire Department. She picked out Seth Flanagan instantly from the photograph her private investigator had provided.

His face, relaxed and smiling, was turned toward one of the other men, who was obviously telling a story. They hadn't seen her yet, giving her a moment to study him. He was tall, solidly built, with broad shoulders and deep auburn hair that might once have been red. That easy grin of his had probably been the first thing that attracted her sister.

Though she hadn't moved, something alerted the men to her presence. Seth straightened, frowning a little as his gaze met hers. Then he started toward her.

Her heart jolted at that frown. If he knew who she was-

No, he couldn't know. Lisa had been very clear, in that last letter of hers, that her two lives would never touch in any way. Her husband and his family would replace the birth family that had made her so unhappy.

She arranged a smile and stepped toward him. "Hello. I'm looking for Seth Flanagan."

"I'm Seth." He held out his hand, but the frown lingered in eyes that were so bright a golden brown that they looked like topaz. "You'd be the photographer. The chief told us you were coming."

The way he said the words gave away the reason for the frown. It wasn't her personally he objected to. It was being expected to work with her.

"I'm very grateful to Chief Donovan for his cooperation." She chose her words carefully. She'd better make it clear that his cooperation wasn't optional. "He's told me that your family will be perfect for my photo article on firefighters."

"You wanted a family of firefighters, and that's us." One of the other men approached.

Hair so dark it was almost black, eyes a deep Irish blue, as tall as Seth but not as broad-the coloring was different, but the resemblance was still strong enough that she'd have pegged them for brothers even if she hadn't known.

"And you are?" She held out her hand.

"Ryan Flanagan." The smile he turned on her probably charmed every woman he met. "I'm the one the chief should have assigned to work with you."

She disengaged her hand. "I'm sure he had reasons for his choice." Aside from the fact that she'd manipulated her requirements to be sure he picked Seth.

"Yeah. He's grooming my big brother for promotion." Ryan elbowed Seth and got a glare in return. "Thinks he's got what it takes to move up."

Some emotion she couldn't identify flickered across Seth's face for a second, and then it was gone. "The chief just knows I'm more reliable that you are, that's all."

She glanced at Seth, to find him watching his brother's flirting, a slight smile on his face. At a guess, that was a habitual posture for him, standing back, watching his brother show off. He didn't seem to need to be the center of attention. Solid, masculine, he was a man used to tough work and comfortable in his own skin.

"Enough, Ryan." He brushed his brother off easily when he was ready. "This is business, not romance central. Go polish a truck."

The man behind them snickered. Ryan shot a look toward him and then shrugged. "Later, Julie." He gave her that charming smile and moved off.

"The chief says it'll take a couple of weeks for you to do this article of yours." Seth's reluctance came through in the words. "That seems like a long time to be tagging around after us."

"You make me sound like a little sister who wants to play with the big boys."

His grin appeared again, relaxing his face. "I already have one of those, thanks. She's a paramedic with the department. Believe me, she outplays the big boys."

That would be Terry, she knew from the private investigator's report. "I'd like to meet her."

"You will if you're really doing this story on us."

Again she sensed the doubt. She'd better try to establish some sort of rapport with him if she wanted to get close enough for this to work.

"I know it sounds as if my presence is going to be an imposition, but I promise, eventually you'll forget I'm even there. That's when I'll get the pictures that will tell the story."

"A family of firefighters. I know." He said the words with a certain air of resignation, as if he were used to being categorized that way.

"It'll be a good story." Assuming she actually published it. For an instant she felt confused. This was the first time in her professional life that the story was just an excuse for another objective.

"Well, the family has agreed, so I guess we're in, but maybe you'd better meet us before you decide whether we're right for your project. My mother asked me to invite you to the house for supper tonight. Everyone won't be there, but enough of us."

He's from a big family, Lisa's letter had said. All noisy and in each other's faces all the time. At first it drove me crazy, but now I love it

Lisa hadn't needed to go on and say how different it was from the Alexander family. She'd known Julie would understand.

"That sounds great." Seth couldn't know that she was cringing inwardly at the idea of meeting the Flanagans en masse.

"Around six, okay? We eat early so my little boy can have supper with us."

Davy would be there. Her heart began to thump. She would see her sister's child.

Seth patted the pockets of his uniform pants. "Do you have something I can write the address on?"

She pulled a notebook and pen from her bag. He bent closer, his head near hers as he scribbled an address in the book. She got a faint whiff of soap, saw the sprinkling of freckles on his skin, felt the sheer masculine magnetism of the man.

Okay. She tried to settle her jangling nerves. This first encounter was almost over, and nothing bad had happened. The next one would be easier.

She closed the notebook on the address and took a step back. "I'll see you at six, then."

She turned toward the door. Relief settled over her. She could escape.

"Julie?" Seth's voice held a question, and she glanced back at him. "Have we met before?"

Panic ripped along her nerves. "No." It took an effort not to let the fear show in her voice. "I'm sure we haven't."

He shrugged. "You looked a little familiar to me when you smiled."

"Maybe I remind you of someone you know." Not Lisa. She and Lisa had different mothers, and no one had ever thought they looked at all alike. Until Seth looked at her and saw something.

"That must be it." A phone rang somewhere behind Seth, and he turned toward the sound.

"I'll see you later," she said quickly, and fled to the door.

She didn't breathe again until she was safely out on the sidewalk. Of all the missteps she'd envisioned, she hadn't thought of this one.

What else hadn't she thought of? She slid into the car she'd rented for the trip, mind whirling. Had she missed anything else that could give her identity away to Seth? Or, worse, anything that could betray Lisa's secret to her father?

She gripped the wheel with both hands. Help me, Lord. I'm walking a tightrope, and if I fall, an innocent child could pay the price.