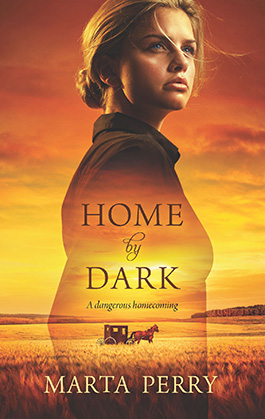 The past can catch up to you…

Rachel Weaver Mason is finally going home to Deer Run, the Amish community she left behind years ago. Recently widowed, she wants desperately to create a haven for herself and her young daughter. But the community, including Rachel’s family, is anything but welcoming. The only person happy to see her is her teenage brother, Benjamin, and he’s protecting a dark secret that endangers them all.

Determined to keep Benjamin safe from a suspected killer, Rachel has no choice but to turn to the one man she wanted to get as far away from as possible. Colin McDonald was her late husband’s friend, and the man who came between them. He’s never forgotten her and would do anything to keep her and her family safe.

Rachel doesn’t know if she can trust Colin or her growing feelings for him. But as they hunt for the killer, the tension between them builds, and soon both their lives, and their hearts, are on the line.

The deserted barn loomed ahead of them, broken beams jutting up toward the darkening sky like menacing fingers. Benjamin Mason shivered, and the gas cans Will had made him carry clanked together.

Will’s head jerked around at the sound. “Keep it quiet.” His voice was a low mutter of Pennsylvania Dutch. “You want to get us arrested?”

“Told you we shouldn’t‘ve brought him.” Joseph Stoltz frowned at him. Both the older boys wore Englisch clothes, and they’d snickered at Benj for showing up dressed Amish.

All very well for them to put on jeans and tee shirts. They were both old enough to have started their rumspringa, and parents turned a blind eye to such clothes then. But he was only fourteen, and Daad would skin him if he found Benj in a get-up like that.

He shivered again, half with cold, half with fear of where this adventure was taking him. It grew chilly at night this early in June, especially out here on the wooded hillside. He hadn’t thought to bring a jacket when he’d crawled out his window and slid down the roof of the woodshed. He’d been too excited that Will and Joseph were letting him come along to think about that.

Now his mind was churning, and he didn’t like what it was telling him. That it was a mistake for him to get involved, that he’d be shaming Daad and Mammi, that—

A loud creak sounded through the trees, and Benj didn’t need Will Esch’s gesture to drop to his knees behind the closest fallen log. Another sound from up ahead, one that he couldn’t identify. Why would anyone be up here in the woods overlooking Deer Run at night? Nobody’d be interested in that falling down barn.

Nobody but Will, who figured it would make a fine blaze up there on top of the hill for the whole village to see. Benj eased his hands away from the gas cans and rubbed clammy palms on his pants. He should of had better sense.

Will leaned over. “I’ll go check it out,” he whispered. “Wait for my signal, ja?”

With Will’s eyes on him, Benj could only nod. Too late now for second thoughts.

Will slipped over the log and slithered through the trees toward the barn. Benj leaned against the rough bark, wishing he was home in his bed. Will was moving quickly—Benj could see him, a dark shadow weaving through the trees. He’d be at the barn in a minute.

Benj turned away, sliding down to sit on the ground. In no time they’d hear Will whistle. Benj would have no choice but to pick up the gas cans and go along. Will was right about one thing. That dry old wood would make a fine blaze. But if they got caught…

He’d never seen an Englisch jail, but it seemed a pretty fair guess he wouldn’t like it.

“What’s taking so long?” Joseph muttered, peering over the log. “I can’t see him—“

He broke off at the sound of a motor. Lights swept through the trees, and Benj’s heart stopped. A vehicle was coming up the old logging road toward the barn. If Will was seen—

A man’s voice, shouting. Then, incredibly, a shotgun cracked through the woods, sending crows lifting in a noisy cloud from the trees. Benj was frozen, wits dazed by the sound.

And then Will vaulted over the log, shoving him with a hard hand. “Run,” he ordered.

Benj scrambled to his feet, following Will, with Joseph a step behind him, bolting through the brush. Another report, a branch crashing to the ground, and he was running as hard and fast as he could, running as if the devil himself were at his heels, crashing through the undergrowth heading down the hill and toward the road, if they got to the road they’d be safe, no one would shoot there—

An eternity later they stumbled out onto the macadam of the road that wound through Deer Run. Across the way was Mason House, where his sister Rachel lived now. He could go to Rachel, he could tell her—

Will grabbed his arm, shook him. “Where’s the cans?”

Benj blinked, then jerked his head toward the hillside. “Back there.”

“Dummy.” Will shoved him. “Ach, they can’t tell who we were from that. All we’ve gotta do is keep quiet.”

Joseph, always more cautious than Will, moved nervously. “But they were shooting. We should—“

“You should be quiet, like I tell you,” Wills snarled. “You didn’t see anything, you don’t say anything, not to anyone. Got that?”

He spun, grabbing Benj by the shirt. “Answer me. You got that?”

Benj nodded. He hadn’t seen anything--that was for sure. Just a dark shape, wielding what had to be a shotgun. And right now he didn’t know whether he was more afraid of Will or the man with the gun.

Something was wrong with her little brother. Rachel Mason Mason swept the paint roller along the wall of what would be the registration area for her bed and breakfast, darting a sideways glance at her brother Benjamin.

Benjamin knelt on the drop-cloth, straw-colored hair hiding his eyes, as he carefully cut in the edge of cream paint next to the woodwork. Benj might only be fourteen, but like most Amish youth, he possessed a number of practical skills, along with a strong work ethic. He’d said he’d help her with the painting, and he’d turned up bright and early this morning for what he called a work frolic.

Rachel suppressed a faint twinge at the expression. With any ordinary Amish family, a dozen or more relatives would have shown up at the word she needed help with the house her mother-in-law had so surprisingly left her.

But she was not Amish any longer. Running away to marry Ronnie Mason at eighteen, leaving behind her home, her family, and her faith, had put a period to that part of her life. Even though she’d come back to Deer Run in the end, a widow with a nine-year-old daughter to support, she couldn’t expect to be treated as anything other than an outsider.

“New paint makes it look better, for sure.” Benj sat back on his heels, glancing up at her with eyes as blue as her own.

Innocent eyes, but holding an edge of worry that didn’t belong there. Benj shouldn’t be jumping at sudden sounds and glancing warily around corners. That wasn’t normal.

“Was ist letz?” The question came out without conscious thought in Pennsylvania Dutch, maybe because that was the language of her heart. “What’s wrong, Benj? Are you worried about something?”

His hand jerked, depositing a drop of cream paint on the woodwork, and he bent to wipe it off with concentrated care. Benj was outgrowing the blue shirt he wore, his wrists sticking out of the sleeves, and the back of his neck was as vulnerable as Mandy’s.

“Worried?” he said finally, not looking at her. “I got nothing to worry about, ain’t so?” He tried to make it sound light, but his voice shook a little.

Rachel wanted to touch his shoulder, to draw him into her arms for comforting the way she would have when he was four. But she’d left then, abandoning him as she had the rest of the family. The fact that he seemed willing to start fresh with her didn’t mean she could go back to the way things once were.

“I don’t want to pry,” she said, choosing the words carefully. “But if you ever want to tell me anything at all, I can keep it to myself.”

Benj seemed frozen, brush poised an inch from the wall. She held her breath, willing him to speak.