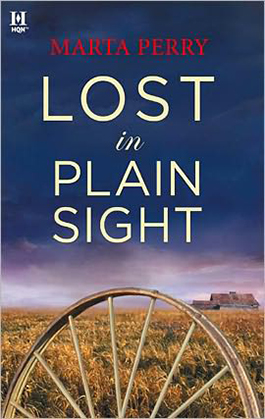 Libby Morgan never wanted to return to Lancaster County. She’d fled the slow pace of Amish country and her foolish love for Adam Byler for a job and a new life across the country. She doesn’t expect to return, until an Amish friend from her childhood pleads for her help, and Libby knows she must go back.

Adam Byler, former Marine and now Police Chief of Springville, will sacrifice himself to keep the peace for both Amish and their “Englisch” neighbors, and he won’t allow his feelings for Libby to distract him. But when Libby’s innocent Amish friend is attacked and left for dead, the two of them are drawn irresistibly together to find the killer, only to face a danger even more threatening than their growing passion for each other.

Leah Miller looked with satisfaction at the canning jars filled with applesauce that lined the kitchen counter. She hadn’t known, when she arrived to work for Geneva Morgan this morning, what she’d end up doing.

Unlike the other Englisch women for whom she worked, who expected their Amish helper to get quietly on with the cleaning, Mrs. Morgan might have anything at all in mind. Leah’s brother had dropped her off just in time to keep the older woman from scaling one of the apple trees in her orchard.

“That looks fine, doesn’t it?” Geneva shed the white apron that enveloped her small form. At least, the apron had started off white. Now it was liberally decorated with applesauce and cinnamon.

“Ja, it does.” Leah wiped her hands on the kitchen towel. “A gut day’s work.”

“We deserve a glass of iced tea and a jumble cookie.” Geneva ran a hand over her short gray curls, setting her earrings jingling. She had to be older than Leah’s mother, but she was as slight and lively as a teenager. “Do you have time before your brother comes for you?”

Leah gave the stove a final wipe. Applesauce did stick so when it splattered. “Abe might be late today. He has a lot to do with a new baby in the house.” She smiled at the thought of her first nephew, not even a month old.

“It’s hard to believe Abe is married and a daadi already,” Geneva said.

She nodded. “It seems only yesterday we were playing hide and seek in the cornfield.”

“And what about you?” Geneva set a pitcher of iced tea and two glasses on the pine kitchen table. “Do you have a come-calling friend?”

Leah shook her head, not meeting Geneva’s gaze. “Not yet.”

Geneva’s eyes were too sharp, and sometimes it seemed everyone in the township, Amish and Englisch, confided in her. She didn’t want Geneva guessing at her secret hopes.

“I hear Josiah King is coming home after all this time out west.” Geneva’s voice was perfectly innocent. “I’m sure your brother will be glad to see his best friend again.”

“Ja, he will.” Leah could feel the warmth in her cheeks. Foolish, to cherish hopes that one day Josiah might look at her and see a woman grown instead of his friend’s pesky kid sister.

Geneva was taking hand-size jumble cookies from the cookie jar on the counter when Leah heard the clop of hooves and the jingle of harness, followed by footsteps on the two stairs up to the back door. They both glanced out the window.

But it wasn’t Leah’s brother. It was Josiah King.

“Why don’t you open the door, Leah?” Geneva’s eyes twinkled. “I’ll get out another glass.”

Leah smoothed her apron down over the skirt of her dress, thankful that she’d happened to put on the green dress and apron that matched her eyes this morning and hoping her hair hadn’t strayed from under the white organdy kapp on the back of her head.

She swung open the door. “Ach, Josiah, it is you. I didn’t think to see you here at Mrs. Morgan’s house.”

She had to look up farther than she used to in order to see Josiah’s frank, open face and his deep blue eyes. Broader and taller than when he’d gone to apprentice with his uncle in Indiana, he seemed to fill the doorway.

“Little Leah. But you are not so little anymore, ain’t so?” He saw Geneva behind her and snatched off his summer straw hat, revealing sun-streaked brown hair. “Mrs. Morgan, it’s wonderful gut to see you.”

“Come in, come in.” Geneva’s voice was warm with welcome. “Have you come to pick up Leah?”

Josiah stepped inside, his arm brushing Leah’s as he moved past her. “Ja, I have. I stopped to see Abe first thing when I got here today, and he was having such a struggle with that reaper of his that I said I’d pick up Leah for him.”

“You have time for a glass of tea, don’t you?” Geneva was already pouring the tea into tall glasses. “We’ve had a warm afternoon for late September.”

“Denke.” Josiah accepted the glass she held out. “How are you—“

His question cut off when the front door bell shrilled loudly over and over, as if someone had planted a finger on the button and kept it there. A flicker of annoyance crossed Geneva’s face.

“Help yourselves.” She waved at the plate of cookies. “I’ll just see who that is.” She hurried out the wide-planked hallway toward the front door.

Josiah grinned at Leah, his familiar smile making her heart seem to flip over. “Abe tells me you have quite a business working in different Englisch houses. Are you liking that?”

“It’s always a pleasure to komm here to help Geneva.” Some of the others weren’t so pleasant. Like Mrs. Grayson, where she’d been yesterday. “But some people act as if I can’t be trusted to clean the house.”

Humility, that most Amish of virtues. She had need of it with some folks. “I’m not so little, remember?”

And I’m not your sister, Josiah. Will you ever see that?

For a moment the silence stretched between them. There was something a little startled in Josiah’s expression, and she seemed to be holding her breath.

A clatter of footsteps in the hallway had them both swinging in that direction. Geneva stood back, staring in amazement at the woman who surged past her, heading straight for Leah. It was Mrs. Grayson, with her husband lagging behind her.

“Mrs. Grayson?” Leah found her voice. “Is something wrong?”