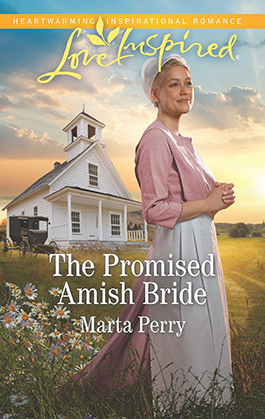 The Brides of Lost Creek continues

Returning to his Amish community after losing his job in the Englisch world, Aaron King isn’t sure if he wants to stay. Everything’s the same, including his childhood friend Sally Stoltzfus. With an uncertain future and a big secret, Aaron has changed. But the more time he spends training a horse with Sally, the more he believes this is exactly where he’s meant to be.

The country road that was as familiar as Aaron King's own body, even after all these years away. Here was the spot where his brother, racing a buddy in the family buggy, went into the ditch. There was the bank where they'd picked blackberries, and there the maple tree where he'd stolen a kiss from Becky Esch when they were both fifteen. The maple's leaves were scarlet now that fall was here, but it had just been budding out that spring.

One more bend in the road, and he'd be able to see the family farm. The realization was like a rock in his stomach.

What was he doing? Did he really want to accept the role of the prodigal, returning to the Amish fold after failing in the Englisch world? That was what they'd think, surely—his two brothers and his uncle. They'd assume he'd messed up, and they'd also assume he'd come back to stay.

They'd be right on the first count—he had to admit it. The memory of the scene that had destroyed his job and the tenuous place he'd made for himself still scalded.

As for coming home to stay…that he wasn't so sure of. To give up modern life, to sink back into the restrictions he'd once left behind, to kneel before the brothers and sisters of the church and confess his wrongs…

The lead weight in his belly grew heavier. He didn't think he could do it. But how many choices did he have left?

He rounded the bend, and the sight ahead of him chased his fruitless thoughts away. A horse reared between the shafts of a buggy, heedless of the efforts of the Amish woman struggling with the lines. Dropping his backpack to the ground, Aaron raced forward. If the horse bolted—

When he reached the animal's head, it was making a determined effort to kick the buggy to pieces, but at least it hadn't run. Sucking in a breath he lunged, dangerously near the flailing hooves. He caught the leather strap of the headpiece and held on tight, all the while talking in the low, steady voice that could calm the most jittery beast.

"Get away from him before you're hurt. I don't want help." The woman spoke in English, not dialect. She thought him an Englischer, and why not? That's what he was now.

Ignoring her, he focused on the animal, watching the flicker of the ears, the shudders that rippled the skin. He kept his voice low, saying soothing, meaningless words. Slowly, very slowly, the kicks grew half-hearted. They stopped, and the gelding stood, head drooping, shivering a little, but starting to relax.

"There now," he crooned in the still-familiar cadences of Pennsylvania Dutch. "You're all right. Something scared you, yah?"

"Nothing more fierce than a paper cup blowing across the road. Could be he wasn't ready to venture out of the farmyard yet." The light, amused voice startled him out of his preoccupation with the animal.

He took a cautious look, his hand still smoothing the gelding's silky neck. The woman set the brake and secured the lines. She jumped down with a quick, light movement that told him she wasn't much more than a girl.

"Denke. If I'd known it was Aaron King coming to the rescue I wouldn't have told you to go away, that's certain sure." A hint of laughter threaded through her voice.

He frowned. Who was it that knew him right off the bat, even in his jeans and denim jacket? But looking did him no good. Foolish, since she recognized him, but he hadn't the faintest notion who she was.

"Ach, you don't know me, do you? That's a blow to my self-esteem, all right. Here I thought you'd never forget me." A teasing voice, a lively, animated face, and laughing blue eyes confronted him. Her silky blonde hair was parted in the center and drawn back under a snowy kapp, but… Then she smiled, showing the dimple in her right cheek, and he knew her.

"It's never Sally Stoltzfus." Aaron had to shake his head, even knowing that after nearly ten years away folks would have changed. "You grew up."

"People do." She patted the gelding. "Though I'm beginning to wonder about Star."

"Your daad never picked out a flighty animal like this for you, did he? He's always been a gut judge of horseflesh. Or is it a husband who did the choosing?"

That gave him a pang, thinking of the little girl who'd had such a crush on him when he'd been a grown-up seventeen and her barely thirteen.

"Not a chance," Sally said, the amusement still in her expressive face. "Everyone knows I'm an old maid by this time, or so my sister-in-law says. And a schoolteacher besides. And no, Daad didn't pick the animal. Star was a present from my Onkel Simon."

"That explains it," he said, with half his mind still wondering how that skinny kid had grown into such a pretty woman. "Simon Stoltzfus never could seem to pick a decent buggy horse. So he passed this failure of his on to you, did he?"

It was pleasant standing here talking to Sally, letting the dialect fill his head and come more easily out of his mouth. And incidentally putting off the moment at which he'd have to face his family.

"Some things don't improve with time," she said. "Like Onkel Simon's judgment of horseflesh. Too bad you weren't around to save me from myself when I accepted Star."

"You wouldn't have taken my advice. The Sally I remember always went her own way." The teasing came back to him, lightening his mood. "I don't expect that has changed."

"Probably not. Ach, what am I doing?" Her blue eyes turned serious, her smile slipping away. "I'm keeping you standing here talking when you must be eager to get home. And the family longing to greet you, I'm certain sure. I can get this beast home for myself now."

"But they'll be looking for you, ain't so? I'd guess Jessie has been baking half the day with you coming home."

Jessie was his brother Caleb's wife, and he'd never even met her. There were two young ones, his niece and nephew, that he hadn't met either. And his brother Daniel was planning a wedding himself next month. Would there even be a place for him with the family so changed?

"Maybe so. If they knew I was coming." He found he didn't want to see her reaction to that.

"You didn't tell them?" Sally's eyes widened. "Aaron King, why ever not? Don't you know anticipation is half the fun? Your Onkel Zeb was just saying the other day how much he wanted to see you. Ever since Daniel visited with you in the spring, he's been hoping to hear word you were coming."

He might have known that folks would hear about his meeting up with Daniel at the racing stable where he'd been working. Nothing stayed secret long in the Amish community. Sally was a close neighbor, of course, but most likely the whole church district knew by now. They'd have had time to talk. To judge.

When he didn't respond, Sally grasped his arm and gave it a shake. "Wake up, Aaron. Why didn't you let them know you were coming? You are staying, aren't you?"

He yanked away from her, suddenly irritated. He should have walked right past and let her manage that nervy horse on her own. Leave it to a woman to complicate matters.

"That's between me and my family." It came out as a snarl, but that was about how he felt…like a wounded animal ready to bite a helping hand.

She took a step back, her hand dropping to her side. "It is. And of course you wouldn't want to say anything to me, knowing that I'll spread it all over the community in the blink of an eyes, being such a blabbermaul as I am."

The tart tone and sharper sarcasm caught him off guard. This wasn't the little Sally he'd known any longer. This was a grown woman whose clear eyes, showing every change of mood, were now sparkling with anger.

The realization startled him into a muttered apology. "Sorry. I didn't mean…"

The ready laughter came back into her eyes again. "Yah, you did."

Funny, that she could make him feel like smiling on a day when he'd thought he had nothing to smile about. "Were you always this annoying about being right?"

"I guess you'll just have to strain yourself to remember that, won't you?" She began turning the horse into the lane to the Stoltzfus place, across the road from the King farm. "Star will come along all right now that we're moving toward home. And that's where you need to be headed, as well. Go home, Aaron." She hesitated, as if wondering whether to say more. "It will be all right." Her voice was soft. "Go home. You'll see."