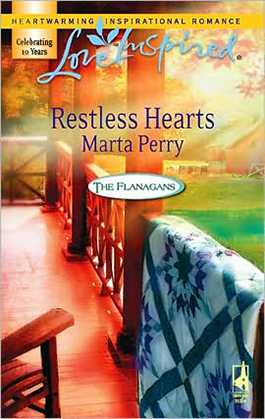 A search for her roots brought midwife Fiona Flanagan to Pennsylvania Dutch country—and made her wonder whether she should turn back. The area's mixture of Amish and English culture confused her, and her first encounter with local police chief Ted Rittenhouse didn't help. he'd thought she was breaking into her own office!

Despite the misunderstanding, Fiona could see that Ted's tough-as-nails exterior hid a kind soul—one caught between two worlds, seeking a place to belong. She felt the same, but trusting him with her heart would require the biggest step of faith she had ever taken.

She was lost in the wilds of Pennsylvania. Fiona Flanagan peered through her windshield, trying to decipher which of the narrow roads the tilted signpost meant. Maybe this wasn't really the wilds, but the only living creature she'd encountered in the last fifteen minutes was the brown-and-white cow which stared mournfully at her from its pasture next to the road.

Clearly the cow wasn't going to help. She frowned down at the map drawn by one of her numerous Flanagan cousins, and decided that squiggly line probably meant she should turn right.

She could always phone her cousin Gabe, but she shrank from having to admit she couldn't follow a few simple directions. Both he and his wife had volunteered to drive her, or to get one of his siblings to drive her, but she'd insisted she could do this herself.

The truth was that she'd spent the past two weeks feeling wary of the open friendliness offered by these relatives she'd never met before. They didn't know her. Why should they care so much about her?

The pastures on either side of the road gave way to fields of cornstalks, yellow and brown in October. Maybe that was a sign that she was approaching civilization. Or not. She could find her way around her native San Francisco blindfolded, but the Pennsylvania countryside was another story.

The road rounded a bend and there, quite suddenly, was a cluster of houses and buildings that had to be the elusive hamlet she'd been seeking. Crossroads, the village was called, and it literally was a crossroads, a collection of dwellings grown up around the point at which two of the narrow blacktop roads crossed.

Relieved, she slowed the car, searching for something that might be a For Sale sign. The realtor with whom she'd begun her search had deserted her when he couldn't interest her in any of the sterile, bland, modern buildings he'd shown her on the outskirts of the busy small city of Suffolk. But she didn't want suburban, she wanted the country, and if her practice as a nurse-midwife was to thrive, it was going to be in a place like this.

Through the gathering dusk she could see the glow of house lights in the next block, but this block contained the village's few businesses, already closed. She went by a one-pump service station, open, and a miniscule post office, closed. The Penn Dutch Diner had a few lights on, but only five cars graced its parking lot.

The Crossroads General Store, also closed, settled comfortably on her right, boasting a display of harnesses and tack in one window and an arrangement of what had to be genuine Amish quilts in the other. And there, next to it, was the sign she'd searched for: For Sale.

She drew up in front of the house. It had probably once been a charming Victorian, but now it sagged sadly, as if ashamed of such signs of neglect as cracked windows and peeling paint. But it had a wide, welcoming front porch, with windows on either side of the front door, and a second floor which might become a cozy apartment above her practice.

For the first time in days of searching, excitement bubbled along her nerves. This might be it. If she squinted, she could picture the porch bright with autumn flowers in window boxes, a calico cat curled in the seat of a wicker rocker, and a neat brass plate beside the front door: Fiona Flanagan, Nurse Midwife.

Home. The word echoed in her mind, setting up a sweet resonance. Home.

She slid out of the car, taking the penlight from her bag. Tomorrow she could get the key from the reluctant realtor, but she'd at least get a glimpse inside in the meantime. She hurried up the three steps to the porch, avoiding a nasty gap in the boards, and approached the window on the left.

The feeble beam of the penlight combined with the dirt on the window to thwart her need to see inside. She rubbed furiously at the glass with a tissue. At a minimum she needed a waiting room, office, and exam room, and if-

"What do you think you're doing?" A gruff voice barked out the question, and the beam of a powerful light hit her like a blow, freezing her in place. "Well? Turn around and let me see you."

Heart thudding, she turned slowly, the penlight falling from suddenly nerveless fingers. "I was just l-looking."

Great. She sounded guilty even to herself.

The tall, broad silhouette loomed to enormous proportions with the torch beam in her eyes. She caught a glimpse of some metallic official insignia on the car that was pulled up in front of hers.

The man must have realized that the light was blinding her, because he lowered the beam fractionally. "Come down off the porch."

She scrabbled for the wandering penlight, grabbed it, and hurried down the steps to the street, trying to pull herself together. Really, she was overreacting. The man couldn't be as big and menacing as she was imagining.

But level with him, she realized that her imagination wasn't really that far off. He must stand well over six feet, with a solid bulk that suggested he was as immovable as one of the nearby hills. In the dim light, she could make out a craggy face that looked as if it had been carved from rock. A badge glinted on his chest.

She rushed to explain. "Really, I didn't mean any harm. I understand this building is for sale, and I just wanted to have a quick look. I can come back tomorrow with the real estate agent."

She turned toward her car. Somehow, without giving the impression that the mountain had moved, the man managed to be between her and the vehicle.

Her heart began to pound against her ribs. She was alone in a strange place, with a man who was equally strange, and her cell phone was in her handbag, which lay unhelpfully on the front seat of the car she couldn't reach.

"Not so fast," he rumbled. "Let's see some identification, please."

At least she thought he said please. That slow rumble was a little difficult to distinguish. She could make out the insignia on his badge now, and her heart sank.

Crossroads Township Police. Why couldn't she have fallen into the hands of a nice, professional State Trooper, instead of a village cop who probably had an innate suspicion of strangers?

"My driver's license is in my car," she pointed out.

Wordlessly, he stood back for her to pass him and then followed her closely enough to open the door before she could reach the handle. She grabbed her wallet, pulling out the California driver's license and handing it to him.

"California." He seemed to pronounce all of the syllables separately.

"Yes, California." Nerves edged her voice. "Is that a problem, Officer?"

She snapped her mouth shut before she could say anything else. Don't make him angry. Never argue with a man who's wearing a large badge on his chest.

She blinked. She almost thought there was a thread of humor in the words.

He handed the ID back. "What brings you to Crossroads Township, Ms. Flanagan?"

"I'm looking for a house to buy. Someone from the realtor's office mentioned this place. I got a little lost, or I'd have been here earlier."

She shifted her weight uneasily from one foot to the other as she said the words. That steady stare made her nervous. He couldn't really detain her for looking in a window, could he?

She looked up, considering saying that, and reconsidered at the sight of a pair of intense blue eyes in a stolid face that seemed to be made up entirely of planes. Don't say anything to antagonize him.

"I see." He invested the two words with a world of doubt. "You have anyone locally who can vouch for you?"

Finally she realized what she should have sooner. Of course she had someone to vouch for her. She had a whole raft of cousins. Family. Not a word that usually had much warmth for her, but maybe now—