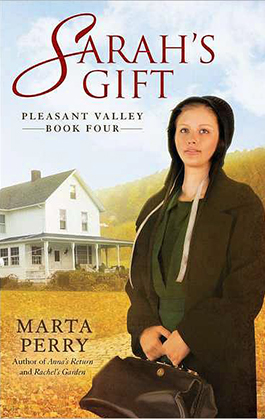 An Amish midwife hopes to earn her community's trust and bring the joy of new life to Pleasant Valley in the third novel in this heartfelt series.

After years in a disappointing childless marriage, and now widowed at only twenty-six, Amish midwife Sarah Mast moves to Pleasant Valley for a fresh start. But unpleasant surprises beset Sarah when she joins her aging aunt’s dwindling midwife practice. Signs of her aunt’s decline suggest that she may no longer be capable of the rigorous demands of her work. With Sarah’s last dollar now invested in the birthing center, can she help her aunt face the truth and run the center alone?

Aaron Miller, Sarah’s neighbor, counts himself among the skeptics until he witnesses the dedication and love she has for her patients. But when an English doctor files a complaint against Sarah, Aaron’s misgivings resurface—just as his own sister faces a birthing crisis.

In the midst of such tribulations, Sarah prays for the strength to defend her practice, care for her patients, and win the hearts of the community she has grown to love.

The first step in Sarah Mast’s new life didn’t seem to be going quite the way she’d expected. She stood at the bus station in Pleasant Valley, her plain dark suitcases by her feet, and pulled her black coat around her against the chilly November wind.

She could sense the curious glances of passers-by, even though the brim of her bonnet cut them from view. Folks were probably used to seeing the Amish in this central Pennsylvania valley, but maybe not an Amish woman standing alone in so Englisch a place as a bus station.

She could see the clock above the counter through the plate glass window. Nearly a half hour past the time she’d told Aunt Emma the bus would arrive. Why was there no one here to meet her?

Doubt crept in, as it did so easily these days. Maybe this move had been a mistake. Maybe...

She pushed the weakening thoughts away. Aunt Emma’s letter had offered her a chance she hadn’t expected...a chance to start over in a new place where she was Sarah Mast, midwife, a useful member of the community, not Sarah Mast, childless widow, an object of pity.

The creak of a buggy alerted her, and she turned to see an Amishman climb down. She let out a breath of relief and headed toward him, but when the man turned, it wasn’t one of her cousins. She stopped, flushing when his startled gaze met hers.

Recognition seemed to grow in a strong-featured face that was vaguely familiar, even though she couldn’t put a name to the man. He stopped, inclining his head slightly.

“You are Emma Stoltzfus’s niece, ain’t so?”

“Ja.” She let out her breath in a sigh of relief. “Sarah Mast. I was afraid Aunt Emma had forgotten about me.”

His dark eyebrows drew down over deep brown eyes as he seemed to assess her words. “You were expecting her to send someone to pick you up then?”

“I’m afraid not.” He seemed to realize she wasn’t sure who he was. “I’m Aaron Miller. My home and shop are just down the road from your aunt’s.”

“Of course. I should have remembered.” She’d have met him the last time she was here, probably.

“I think it must be a good six or seven years since you visited Pleasant Valley. Long enough to forget a few names, ain’t so?”

She nodded, but the memories had begun to come back now that she had a name to hang them on. Aaron was taller and broader than the boy he’d been then, but he hadn’t changed all that much. He was clean-shaven, which meant he wasn’t married yet, and he had to be a year or two older than she was. That was unusual among the Amish, who married and started their families earlier than their Englisch neighbors.

The wind whipped around the corner of the building, and Sarah couldn’t stop a shiver.

Aaron frowned, glancing up and down the street. “How long have you been waiting?”

“Half an hour. Maybe a bit more. I’m sure someone will be along soon...”

“There’s been some mix-up, that’s certain sure.” Aaron bent and picked up her suitcases. “Let me stow these in the buggy and see if the part I expected came in on the bus. Then I’ll take you to your aunt’s.”

“I don’t want to put you out.” Though anything would be better than standing here in the cold.

“It makes no trouble. I’ll be headed home anyway.” He hefted her bags in easily and then took her arm to help her up to the high seat, closing the buggy door to cut off the wind. In a moment he had vanished into the bus station.

She settled on the seat of the closed buggy, tight muscles relaxing. Foolish, to be so stressed by the trip from Ohio, but what had been an adventure when she was an enthusiastic eighteen, out to spend the summer with a favorite aunt, had been a tiring ordeal this time. She looked back at the girl she’d been with a sense of amazement.

She’d been so sure then of the course her life would take. She’d be a midwife like Aunt Emma, delivering lots of babies. She’d marry the man she loved and have babies of her own.

She’d become a midwife. She’d married Levi. But the longed-for babies hadn’t come, and eventually that seemed to taint everything else.

Aaron returned, shoving a cardboard box under the seat before he climbed up. He gave her a smile that brought her memories of him into sharper focus. “All set?”

She slanted a glance at him. His face had always been strong, even as a teenager, with a gravity that seemed to say he took responsibilities seriously. She waited until he’d moved into the stream of traffic before she spoke again.

“You had younger brothers, I remember. And a sister who was a bit younger than me.”

“Molly.” The gravity lightened at his sister’s name. “She married last year. She’s expecting a baby.”

“That’s wonderful news.” Warmth filled her voice—the warmth she always felt at knowing a new life was coming into the world. She’d never let her own barrenness affect that. “She must be so happy.”

“Ja, and her husband, too. She married Jacob Peachey. He’s a gut man.”

“And your brothers?” They were on the edge of town in a matter of minutes. The traffic lessened, and his hands were relaxed on the lines.

“Nathan and Benjamin are still at home. They work with me doing carpentry and remodeling.”

“That’s gut, having them with you.”

Aaron would be a fine older brother, she’d guess from the little she remembered of him. Patient, steady, soft-spoken, with a quick intelligence showing in even light conversation.

“I heard that your husband died. I am sorry for your loss.”

She nodded in acknowledgement. “Denke, Aaron.” She tried to stifle the pain sympathy always brought on. Levi was gone, but his disappointment in her lingered. Maybe it always would.

Sarah. Barren, like Sarah in the Bible. The difference was that the Old Testament Sarah had eventually seen her dreams of a child come true.

She took a deep breath, focusing on the road ahead. Aunt Emma’s need for help and her need for a new life came together in a way that had to be God’s design for both of them, surely.

Aaron turned onto the narrow blacktop road that wound past farms and woodlots. The trees had lost their leaves already. Aunt Emma had written that autumn had turned cold quickly this year in Pleasant Valley. But the silos would be filled, and the Amish farmers ready for the quieter time of year.

“Your aunt will be looking forward to your visit,” Aaron said, as if he felt bound to make conversation with a visitor. “Especially now, since I hear her practice is closing.”

Sarah swung toward him, shock ripping through her. “Closing?” For a moment she couldn’t breathe. “No. The practice is not closing. That’s why I am here, you see. I’m a midwife. I’ll be helping her with the practice.” All her hopes for the future seemed to fill the words.

She saw his face. Saw it harden, turn tight with rejection of her, of her plans.

To Aaron Miller, at least, she wasn’t welcome here.