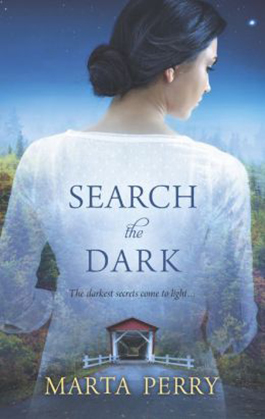 Sometimes the past is best left buried….

Meredith King longs for escape. Life in Deer Run is stifling, the Amish town too small for a modern woman staying just to care for her ailing mother. When a friend enlists her help in clearing the name of an Amish boy whose decades old death is till shrouded in mystery, she welcomes the challenge. But when a ghost from her own past reappears, there is suddenly a lot more at stake.

Zach Randal was always a bad boy, and their romance never had a chance. As charming as ever, he returns to town on the heels of a deadly new threat. Is Zach as dangerous as Meredith was always led to believe? Or is the attraction they both feel the only thing that can save them from harm?

A thin shaft of moonlight penetrated the shadows under the trees, turning the surface of the pond to silver. Strange, that the place should look so serene. No one knew; no one even imagined that murder happened here.

A shadow stirred within the densest shadows. Foolish to come here, but on sleepless nights the lure was too great. Stand here for a few moments, that was all that was needed. Remember.

It was safe enough. No one knew, no one watched. The darkness hid everything, just as it had hidden what had been done here twenty years ago.

Accident, they’d all said. The locals knew how dangerous the dam was where the stream emptied into the pond below. Only a few feet high, but in times of heavy rain the dam could produce a current as strong as any riptide.

The boy had been careless, people had said. An Amish kid, maybe drinking, maybe showing off, trapped by the dangerous water and drowned. The Englisch spoke of putting up a fence; the Amish said it was God’s will. Tragic, but understandable.

The secret lay forgotten for twenty years, until those two stupid women had come together again. They’d been children when Aaron Mast died, but they’d loved him. They talked, they wondered, they asked questions.

Well, for all their questioning, what they’d found was a good reason to call Aaron’s death a suicide. Tragic, wasn’t it? The village had buzzed about it again for weeks, but now even the talk slipped away like a leaf on the current.

No one thought of murder. No one would. But if the unthinkable happened…well, there might have to be another death at Parsons Dam.

The shadow stirred, stepping toward the water for an instant, and then slid back into the darkness and melted away in the night.

“You are the only one who can find the truth, Meredith. You must do it.”

Meredith King stared in dismay across the small café table at her cousin Sarah. With her hair drawn tightly back under her kapp and her simple Amish dress, Sarah seemed an unlikely person to be urging her cousin to investigate a death that had occurred twenty years ago. But worry had driven lines around Sarah’s normally placid blue eyes, and she reached one hand across the table in pleading.

“I’m not sure what I can do.” That came out sounding much less definite than Meredith had hoped. “Aaron drowned twenty years ago. There’s probably nothing left to learn.”

And a small-town accountant shouldn’t be anyone’s idea of a crusader. Her weekly coffee klatch with her Amish cousin had turned in a direction Meredith had never anticipated.

“But it was your looking into what happened that summer that brought about this talk of Aaron killing himself. Yours and Rachel’s,” Sarah added. “You’ve already found out so much—surely you can discover the rest of it.”

Meredith couldn’t argue that she’d resurrected the talk about Aaron Mast’s death, no matter how she might want to. When her childhood friend, Rachel Weaver Mason, had come back to Deer Run several months earlier, they’d started reminiscing about the events of that summer when they’d been ten and had shared a childish crush on the Amish teenager.

Aaron had been the hero of the imaginary world they’d created that summer. But the world had come crashing down when Aaron died in the pond below Parsons Dam. What started as harmless wondering about the events of that summer had also ended in uncovering the probability that Aaron had committed suicide.

“I’m sorry we ever started poking into it,” Meredith said, guilt settling across her shoulders like a heavy blanket. “We certainly didn’t intend to cause grief to his family.”

“Please, Meredith. I can’t go asking questions among the Englisch, but you can.” Sarah gestured to her Amish dress as if in explanation.

True enough. An action that would be unthinkable for an Amish matron was possible for Meredith.

“Besides, you know as much as anybody about that summer, following Aaron around like you did.” Sarah must have sensed her hesitation and pressed on. “I know you were just a girl, but you didn’t forget our Aaron, ain’t so?” The possessive way Sarah spoke suggested that Aaron had meant something special to her.

“Aaron was a friend of yours, then?” She should have realized that Sarah, ten years older than Meredith, would have been about Aaron’s age.

“Friend, ja.” Sarah’s gaze seemed to lose focus, as if she looked into the past. “More than friends, once.” She shook her head, becoming again the mature Amish wife and mother. “But this talk of suicide hurts so many people. The Aaron I knew would not do such a thing.”

“Sometimes we don’t know others as well as we think.” For example, she’d never guessed that there had been any love in Sarah’s life other than her husband, Jonah. “Even if I can think of a way to find out more, you might not be happy with the result.”

“If Aaron really did this thing, I will bear it.” Sarah’s voice was firm. “We all will. But we must know for certain sure.”

Meredith was silent for a moment, trying to find a way to refuse. She didn’t want to bring still more heartache to people who’d already suffered so much.

But Sarah was the closest link she had to her father and the Amish side of her family. For their sake, she couldn’t refuse to do as Sarah asked, could she?

The Lord be with you. She’d certainly need the help if she were to solve a twenty-year-old mystery.