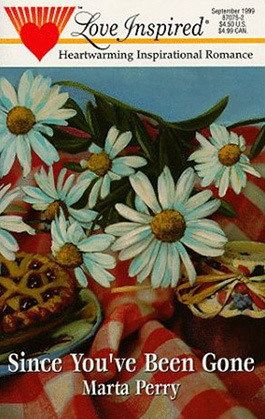 Suddenly Nick was back. Rich, powerful--and ready for revenge. Worse, the dark, dangerous prodigal seemed to enchant Emily anew. To inspire hero-worship in her fatherless twin sons. Did Emily have a prayer of softening Nick's heart? No matter what people said, she had to try. Because, Heaven help her, she was falling in love with Nick all over again.

Emily Carmichael's twin sons raced down the soccer field, David struggling to keep up with Trey as he always did. David's navy jersey had come out of his shorts, flapping around his knees like a skirt, and his glasses slid down his nose. The soccer ball rolled toward him, dazzling white against green.

Emily held her breath. Just this once, if David could only succeed...

He swung his leg, missed, and sprawled on the turf, his glasses flying.

Emily's nails bit into her palms. She couldn't run to him, no matter how much her heart ached. That would violate the macho code of third grade boys. The ball and the players surged on toward the goal, leaving him behind. Trey ran a few steps, hesitated, then turned and came back to his brother. Emily breathed again as he helped David up.

"At least you won't have to get him a new pair of glasses. Looks like Trey found them."

Emily turned to smile at Lorna Moore. "That would only be the fourth time this year."

"One of the costs of sports they don't tell you about when you sign your kids up."

A golden leaf from the trees that fringed the field drifted into Emily's lap. She held it for a moment, mind absently registering the soccer mom conversation taking place around her...carpools, school schedules, dancing lessons...

"Have you heard?" a breathless voice behind her asked. "You know who's back in town? Nick O'Neill!"

Emily's fingers tightened, crumpling the leaf. The name broke through the smooth surface of her day like a shark in a trout pond.

She struggled to keep her face impassive, her eyes on the game. Unfortunately, what she was seeing wasn't the group of eight-year-olds. It was Nick's face the way she'd last seen it fourteen years ago -- angry, accusing, betrayed. The familiar spasm of guilt caught her.

"I don't know how he has the nerve to show his face in Mannington again."

The comment floated through the autumn air, pitched just loudly enough to reach Emily. Sooner or later someone would ask her directly. They were too intimidated to question her father-in-law, so they'd ask her.

James Carmichael, benevolent dictator of Carmichael Mills, major employer in this small Pennsylvania town, was enough to intimidate anyone. He ruled his mill the way he'd once ruled his son and now tried to rule his son's widow. Only economic necessity had forced him to consider sharing his power through the merger with Ex Corp.

Emily brushed the remnants of the leaf from her tan slacks. Since Jimmy's death four years ago, she'd taken his seat on the mill's board of directors, not that her formidable father-in-law allowed anyone else to do much directing. At least he kept her informed about company business... in this case, that Nick O'Neill, of all people, was coming to town as Ex Corp's representative.

"Well, Emily, aren't you going to tell us? Is it true that Nick O'Neill is back in town?" Margaret Wentworth leaned forward to rest an elegant hand on Emily's lawn chair, the slightest hint of malice showing in her eyes.

She should have known it would be Margaret who asked. Wentworths had lived in Mannington almost as long as Carmichaels had, and Margaret had once thought Jimmy Carmichael was hers for the taking.

Emily tried to smile. "Ex Corp is sending him to manage the merger with the mill. I don't know any more than that."

"You mean you haven't seen him yet?" Margaret's arched brows lifted. "My husband saw him walking down Elm Street just this morning."

Please don't let her bring up the past, Lord. Please. It's buried, isn't it?

"We thought perhaps he was coming to see you. You're such old friends." Margaret planted the barb and smiled.

"I haven't seen him." That almost sounded as if she cared. "He'll probably be too busy with the merger to look up old acquaintances."

"Not just acquaintances. You and Nick were quite the item back in high school, weren't you?" Margaret laughed lightly. "The town bad boy and sweet little Emily. How could anyone forget that?"

The smile felt as stiff as cardboard on Emily's face. She could almost hear the indrawn breaths as everyone waited for her response. "I'm sure people have better things to do than worry about people I forgot a long time ago. Do you remember all your old boyfriends, Margaret?"

Anger flashed in Margaret's eyes. Emily bit her lip. She hadn't meant it as a reference to Jimmy. She considered apologizing, but that would probably make matters worse.

Margaret turned away with a brittle laugh, and Emily's hands unclenched. Apparently she'd been kidding herself. Memories were long in a town like Mannington. They certainly stretched back fourteen years.

Guilt flickered again. Her past was returning to haunt her, in the shape of the man she'd never forgotten.

What was she thinking? Of course she'd forgotten Nick. And would again. He'd be here for a few weeks, and then he'd leave and everything would return to normal.

A little shiver went down her spine. She knew why Nick was supposedly coming to Mannington. But given what had happened between him and the town -- between him and Emily -- she couldn't believe that was his only reason.

The whistle blew, ending the game, and the twins rushed toward her. She shoved thoughts of Nick's return to the back of her mind and stood to meet them.

"We almost won, Mom." Trey, ever the optimist, gave her the grin that one day would break girls' hearts. "Next time we'll do it."

"Next time we have to play the Tigers," David pointed out. "They're a lot better than we are." He kicked disconsolately at a clump of grass, and Emily knew he was seeing the ball he'd missed.

"Well, we just have to get better." Trey said it as if nothing could be easier. "When we get home, we'll practice. You'll see. Everything's going to be great."

For an instant, Emily envied him his optimism. She'd like to feel that way about the changes Nick O'Neill and this merger might bring to town.

No, that was impossible. But it should be possible, even easy, to avoid the apprehension roused by the thought of seeing him. She just had to avoid seeing him at all.