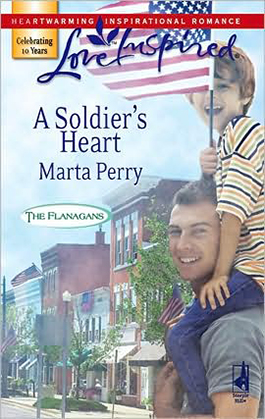 Wounded army officer Luke Marino was sent home, his career and his spirit shattered. Now he wanted only to be left alone, refusing even the physical therapy he needed.

But Mary Kate Flanagan Donnelly, a widow with two children to raise on her own, needed Luke’s case to prove herself as a capable therapist. Despite the revival of feelings she thought dormant since their high school romance, she was determined to help the stubborn hero and keep matters strictly business.....

She was keeping an appointment with a new client, not re-visiting a high school crush. Mary Kate Donnelly opened her car door, grabbed the bag that held the physical therapy assessment forms, and tried to still the butterflies that seemed to be doing the polka in her mid-section.

What were the odds that her first client for the Suffolk Physical Therapy Clinic would be Luke Marino, newly released from the Army hospital where he’d been treated since his injury in Iraq? And would the fact of their short-lived romance in the misty past make this easier or harder? She didn’t know.

She smoothed down her navy pants and straightened the white polo shirt that bore the SPTC letters on the pocket. As warm as this spring had been, she hadn’t worn the matching navy cardigan. The outfit looked new because it was new—just as new as she was.

Nonsense. She lectured herself as she walked toward the front stoop of the Craftsman-style bungalow. She was a fully qualified physical therapist, and just because she’d chosen to concentrate on marriage and children instead of a career didn’t make her less ready to help patients.

The truth was, her dwindling bank balance didn’t allow her any second thoughts. She had two children to support. She couldn’t let them down.

The grief that was never far from her brushed her mind. Neither she nor Kenny had imagined a situation in which she’d be raising Shawna and Michael alone. Life was far more unpredictable than she’d ever pictured in her safe little world.

For Luke, too. He probably hadn’t expected to return to his mother’s house with his legs shattered from a shell and nerve damage so severe it was questionable whether he’d walk normally again.

Ruth Marino’s magnolia tree bloomed in the corner of the yard, perfuming the air, even though Ruth herself had been gone for nearly a year. Luke had flown from Iraq for the funeral. Mary Kate had seen him standing tall and severe in his dress uniform at the church. They hadn’t talked—just a quick murmur of sympathy, the touch of a handshake—that was all.

Now Luke was back, living in the house alone. She pressed the button beside the red front door. Ruth had always planted pots of flowers on either side of the door, pansies in early spring, geraniums once the danger of frost was past. The pots stood empty and forlorn now.

There was no sound from inside. She pressed the button again, hearing the bell chime echoing. Still nothing.

A faint uneasiness touched her. It was hardly likely that Luke would have gone out. Rumor had it he hadn’t left the house since he’d arrived, fresh from the Army hospital. That was one reason why she was here.

“You went to high school with him.” Carl Dickson, the PT center’s director, had frowned at the file in front of him before giving Mary Kate a doubtful look. “Maybe you can get him in here for an assessment. He’s refused every therapist we’ve sent. You certainly can’t do any worse.”

She had read between the lines on that. She was new and part-time, so her hours were less valuable. Dickson didn’t want to waste staff on a patient who wouldn’t cooperate, but he also didn’t want to lose the contract from the US Army if he could help it.

She pressed the bell again and then rapped on the door, her uneasiness deepening to apprehension. What if Luke had fallen? His determination to reject every professional approach, even every act of kindness, left him alone and vulnerable.

She grabbed the knob, but it refused to turn under her hand. Kicking the door wouldn’t get her inside, tempting as it was, and if Luke lay helpless, he couldn’t answer.

She stepped from the stoop and hurried around the side of the house toward the back door. She’d grown up less than two blocks away, in the house where her parents still lived. Luke had been at their place constantly in those days, shooting hoops on the improvised driveway court. A frayed basket still hung from the Marino garage, mute testimony to Luke’s passion for sports.

The back porch had the usual accumulation—a forgotten rake, a trash can, a couple of lawn chairs leaning against the wall. She hurried to the door and peered through the glass at the kitchen.

At first she thought the figure in the wheelchair was asleep, but Luke roused at her movement, fastening a dark glare on her. He spun the wheels of the chair, but she didn’t think he was planning to welcome her in. She opened the door and stepped inside, closing it behind her.

“Don’t you wait to be invited?” The words came out in a rough baritone snarl. Luke spun the chair away from her, as if he didn’t want to look at her.

Or, more likely, he didn’t want her to look at him.

Her throat muscles convulsed, and she knew she couldn’t speak in a normal way until she’d gotten control of herself. But Luke--

The Luke she remembered, as a high school football hero, as a police officer, as a soldier when his reserve unit was called up, had been all strength and muscle, with the athletic grace and speed of a cheetah and a relaxed, easy smile. Not this crumpled, pale, unshaven creature with so much anger radiating from him that it was almost palpable.

She set her bag carefully on the Formica and chrome table, buying a few more seconds. She glanced around the kitchen. White painted cabinets, linoleum on the floor, Cape Cod curtains on the windows—Ruth hadn’t changed anything in years.

“I didn’t think I had to stand on ceremony with an old friend,” she managed to say, her voice gaining strength as she spoke. “Besides, I thought you might not let me in if I waited for an invitation.”

He didn’t answer the smile she attempted, sparing her only a quick glance before averting her face. “I don’t want company, Mary Kate. You must have heard by now that I’ve made enemies of half the old ladies at church by rejecting their casseroles.”

“Mom wouldn’t appreciate being called an old lady, so you’d better not repeat that in her hearing.”

Her mother had tried, and failed, in her quest to see that Luke had a home-cooked meal delivered by the church every night. Luke had apparently slammed the door in the face of the first volunteer and then refused to answer the bell for anyone else. After a week of refusals, her volunteers had given up.

“I didn’t mean—“ He began, and then stopped, but for just an instant she’d seen a glimmer of the old Luke before his face tightened. “I don’t want visitors.”

“Fine.” She had to make her voice brisk, or else the pain and pity she felt might come through. She knew instinctively that would only make things worse. “I’m not a visitor. I’m here as a physical therapist.”

He stared for a moment at the crest on her shirt pocket, swiveling the chair toward her. His legs, in navy sweat pants, were lax against the support of the chair.

“Doesn’t your clinic have rules against you barging in without an invitation?” For an instant the old Luke peeked through in a glimpse of humor.

“Probably.” Definitely, and as the newest member of the staff, she couldn’t afford to break any of the rules. On the other hand, she couldn’t go back and admit failure, either. “Are you going to report me, Luke?”

His dark brows drew down like a slash over those deep brown eyes. He’d once been the guy most often talked about in the girls’ locker room, mostly because of those eyes. Smoky eyes, with a hint of mystery in them. Combined with the chiseled chin, firm mouth, jet black hair, and the glow of his olive skin, his looks and that faintly dangerous charm had had the girls drooling over him.

And he’d picked her. For a brief time, she’d gone out with the most sought-after guy in school. She hadn’t thought of that in years. Seeing him now brought it all flooding back—those days when you were up in the clouds one minute because that special guy had smiled at you and down in the depths the next because he’d smiled at someone else, too.

It hadn’t lasted, of course. Maybe, in her naïve first love, she’d been too clingy. Luke had made excuses, failed to return phone calls, and finally had been seen in the back row of the movie theater with Sally Clemens. She’d given him back his class ring, kept her chin up and done her crying in private.

Luke just stared at her. Maybe he was remembering that, too. Finally he shook his head, the stubble of his beard dark against the pallor of his skin. “No, I won’t turn you in. Just beat it, okay?”

“Sorry, I can’t.” She pulled out one of the chrome kitchen chairs and sat down, reaching for the forms in her bag. “You’re two weeks past due to report to the clinic for your evaluation and therapy. Why?”

His jaw clenched. “I’ve spent the last three months being poked and prodded by Army experts. If they couldn’t get me out of this chair, I don’t think your outfit can. Just go back to your boss and tell him I appreciate it, but I don’t need any more therapy.”

His words twisted her heart. What he’d gone through would be horrible for anyone, but for Luke, who’d spent his life relying on his strength and skill, first on the playing field, then in the military and on the police force—well, this helplessness had to be excruciating.

Showing the pity and compassion that welled up in her was exactly the wrong way to react. To offer him sympathy would be to rub salt into an already agonizing wound.

But she couldn’t walk away. He needed her help, or someone’s help, whether he wanted it or not.

And she needed to make a success of this. A little flicker of the panic that had visited her too often since Kenny’s death touched her. She had to provide financially for her kids, and that meant she had to prove herself at the clinic.

She took a steadying breath. “Sorry, Luke. I’m afraid I can’t do that.”

“Why not?” He shot the words at her, swinging the chair closer to her in one fierce movement. “I don’t need your therapy and I don’t want it. Why can’t you just understand that and leave me alone?”

His anger was like a blow. She stiffened in response. She couldn’t let him chase her off, the way he had everyone else.

“I can’t. And you don’t really have a choice, do you? If you continue refusing to cooperate, the Army will slap you back into a military hospital. And I don’t think they’ll let you bully them.”