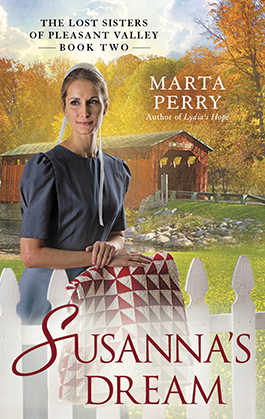 As young girls, three Amish sisters were separated and told nothing about each other. When the long-held secret of their parentage came to light many years later, two of the grown women reconnected. Now they reach out to the third…

Susanna Bitler’s life is in complete turmoil. Still reeling from the death of her mother, she is further disheartened when her business partner hints that she is going to quit the gift shop they run together near Pleasant Valley. But the biggest revelation is yet to come.

Grateful for their own hard-won relationship, Lydia Beachy and Chloe Wentworth are eager to reveal themselves to Susanna as her long-lost sisters. But their news utterly distresses Susanna, who is heartbroken to learn that the woman she’s been mourning was not actually her mother. Despite Lydia and Chloe’s best efforts to make amends, Susanna resolves to keep them at arm’s length. It may take a force of nature to sweep away her fears. Will that storm demolish all that the three women most value…or unite them in bonds of deep and abiding affection?

The shop was too quiet. Susanna Bitler straightened one of the paintings she had on consignment from an Englisch artist and moved on to the display of quilted placemats. Her partner in Plain Gifts, Dora Gaus, might return from her doctor’s appointment in time to close, but Susanna certain sure didn’t need help.

A rainy weekday in September always meant few customers in the shop. Still, it didn’t normally feel lonely, crowded as it was with baskets and candles, placemats and wall hangings, hooked rugs and table runners, all of them handmade by local craftspeople. The bright colors and myriad of textures would cheer anyone, wouldn’t they?

Unfortunately, being alone gave her too much time to think. Susanna smoothed the skirt of her black dress, a reminder of her mother’s death less than a month ago. She must stop feeling sorry for herself. Her mother would be the first one to tell her so. Mamm’s death had been God’s will, and she wouldn’t have wanted her mother to linger in pain. Still…

The sound of footsteps on the shop’s small porch ended the stream of thoughts that might well have her in tears if she wasn’t careful. Susanna turned toward the door, arranging a welcoming smile on her face.

The bell tinkled as the door opened, and the smile froze despite her efforts. It wasn’t a customer. Her visitor was Nathaniel Gaus, Dora’s son. A nice enough man, from all Susanna knew of him, except that he always seemed to regard his mother’s young partner with a vague disapproval that Susanna found unsettling.

“Nathaniel.” She moved toward him, more than usually aware under his observant eyes of the limp that was the remnant of a childhood accident. “Wilkom. I’m sorry, but your mother isn’t here this afternoon.”

Odd, that he wouldn’t have known. He must have forgotten, occupied as he was with his own business. Dora had lived with her son since the death of his wife several years earlier.

Nathaniel slapped his black hat against his leg to shake off the raindrops that clung to it. With his fair hair and beard, blue eyes, ruddy skin, and broad shoulders, Nathaniel probably looked like the popular Englisch image of an Amish man, but he wasn’t a typical farmer. He owned Gaus’s Bulk Foods, a thrivingstore in here in Oyersburg.

“Ja, I know.” Nate came closer, so that she had to tilt her head to see his face. “I don’t think I’ve talked to you since your mamm’s funeral, Susanna. I hope you are doing well.”

“Denke. It’s been…a difficult time.” She blinked, taken aback by the tears that seemed to come too readily when someone spoke of Mamm. “May I take a message for your mother?”

A slight frown wrinkled his forehead. “No, that’s not necessary. Actually, I came to speak to you.”

Susanna stiffened, thoughts jostling in her mind. “Was ist letz?” She couldn’t imagine Nate seeking her out unless something was wrong.

“Nothing’s wrong.” But his tone seemed to argue with the words.

He glanced around the shop, his gaze skimming the pottery, the hooked rugs, and all the other things that she’d just been thinking made Plain Gifts so cozy and welcoming. Nate’s look was assessing instead of admiring, she thought.

“The shop isn’t busy,” he observed.

Susanna tried to quell the defensive feeling that sprang up at what she felt was the criticism in his tone. “Now that school is in session, many of our shoppers come on Saturdays. And I’m certain sure business will pick up again as we get closer to Christmas.”

As a businessman, he should understand that, but probably Nate didn’t have such cycles in his bulk foods business. Folks always had to eat, but they weren’t always looking for gifts and crafts.

“I suppose.” The frown settled between his straight brows. “That’s why Mamm is always so tired around the holidays.”

Susanna wasn’t sure whether that was a complaint or not. What was he driving at?

“Ja, I suppose we both work extra hard then. We could always get a girl in to help out if needed.”

His frown seemed to deepen. “Mamm has family to keep her busy, especially at the holidays. It’s different for you.” He stopped, the color deepening in his ruddy cheeks as he seemed to hear what he’d just said. “I didn’t mean—“

“It’s true that I don’t have any kin here in Oyersburg now that my mother has passed. And that certainly gives me more time for the shop.” She kept her normal, quiet tone, but Nate’s attitude was beginning to bother her. Why didn’t he just come out and say whatever he wanted to say? “What is it you wanted to talk with me about?”

He blinked, as if startled that she would be so blunt. “Ja, well, the point is that my mamm isn’t getting any younger.”

She could imagine Dora’s reaction at hearing her son imply she was getting old. “None of us are doing that.”

A flash of exasperation crossed his face, but he reined it in quickly. Nate was a man who didn’t let his feelings show. He always had a pleasant smile for his customers, but his eyes seemed constantly on guard.

“True enough. I didn’t come here to argue with you, Susanna. I want to ask for your help.”

“My help?” That was surprising. Nate didn’t seem to need anyone’s assistance, as far as she could tell. He’d built up his successful business on his own, and he controlled every aspect of it, no matter how small, according to his mother.

His face relaxed into a smile, his usually cautious blue eyes warming in an expression Susanna had never seen before…one that gave her a funny, prickling feeling along her skin. “Ja. I apologize. I shouldn’t beat around the bush, ain’t so?”

Most women would have trouble resisting the genuine smile that appeared so rarely on his face, and she didn’t seem to be an exception. “What do you need?”

He hesitated for a moment. “I would like your help with my mother.”

“With Dora?” Her breath caught. “Is something wrong with her?”

“No, no.” He touched her sleeve lightly in reassurance, and his warmth penetrated the fabric, startling her. “She is getting older, that’s all, and I fear she’s working too hard. She ought to be able to take it easy now that her kinder are grown.”

Susanna tried to imagine the ever-busy Dora sitting in a rocking chair with her knitting instead of being up and doing. She couldn’t. How best to convey that to Nate?

“Maybe your mamm doesn’t want to take it easy.”

“Sometimes people aren’t the best judge of what’s good for them,” he countered.

“True enough.” A frown wrinkled her forehead. “If you think Dora should take more time off, I am happy to work longer hours in the shop.” Probably everyone in Oyersburg’s Amish community knew she had little else in her life just now.

“Ach, we both know how she is.” His smile invited her to agree with him. “She’d be in here every day anyway just to make sure things were running fine.”

Susanna realized she was staring at him, studying the strong lines of his face for any clues as to what he was really saying. “You know I would do anything for Dora, but I’m not sure what you want from me.”

His gaze sharpened as if he’d finally reached the heart of the matter. “It’s simple, Susanna. I want you to persuade my mother to give up the shop.”

The words fell with such stunning swiftness that they shocked her into immobility. Nate went on talking, but his voice was only a background to the panic that swept in as she realized the impact of his proposal.

“…you might buy my mother out if you wanted to run the shop on your own, of course. Or I thought maybe since your mother is gone, you’d want to move back to Ohio, where you grew up. You’d have friends and kinfolk there. I’m sure the shop was a good solution when you had your mamm to take care of, but now you’re free to—“

“No.” The word came out with explosive force.

For a moment Nate didn’t speak. “No what?” His brows gathered like thunderclouds forming.

“No, I will not try to talk Dora into doing something I don’t think she wants to do.” A few other words crowded her lips, words about bossy men and people who thought they had all the answers, but she held them back. It was not in her nature to start a quarrel.

“I think I know what is best for my mother.” Nate’s voice had hardened.

She hesitated, but she had to say what she felt. “And I think your mother knows what’s best for her.”

Nate’s shoulders stiffened. “Then I guess we don’t have anything more to say to each other.” He settled his hat squarely on his head and stalked out, disapproval conveyed in every line of his body.

The door closed hard enough to make the bell nearly jangle off its hook. Susanna stood immobile until Nate had passed the shop window and disappeared. Then she clasped her hand over her lips.

But if Nate had his way…

The money she had left after her mother’s final illness was nowhere near enough to buy out Dora’s half of the business. What was she going to do? She couldn’t lose the shop. She didn’t have anything else.