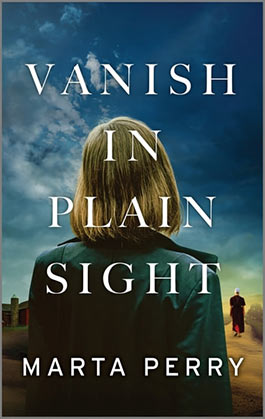 Since she was a little girl, Marisa Angelo has been haunted by the image of her mother walking away, suitcase in hand, to return to her Amish roots. Marisa and her Englischer father never saw or heard from her again. Now Marisa has received a shocking call from police. Her mother’s bloodstained suitcase was found hidden inside the wall of a Pennsylvania Dutch farmhouse. Desperate for answers, Marisa heads to Lancaster County. But no one—not the police or Marisa’s tight-lipped Amish relatives—can explain what happened to her mother. Only one man is as determined as Marisa to unravel the mystery—Link Morgan, the handsome ex-military loner who found the suitcase in the house he inherited from his uncle. Now both Link’s and Marisa’s family member are implicated in the decades-old disappearance. The secret lies somewhere in the quaint Amish settlement. But someone will do anything to ensure the truth remains hidden forever.

Link Morgan narrowed his focus to the heavy sledgehammer and the satisfying thwack it made it when broke into the old paneling. The paneling shattered, its shoddiness a contrast to the solid double-plank construction of the rest of the old farmhouse.

Setting the sledgehammer down, he pulled fragments loose with gloved hands, tossing them into a pile in front of the fireplace. The last bit of the section came free, revealing what lay behind it.

He stared, methodically wiping the sweat from his forehead. Shaking off the foreboding that gripped him, he reached into the wall and pulled out the object that lay there. A suitcase. Not empty, by the feel of it.

Carrying it to the makeshift worktable, he set down his find. An inexpensive suitcase, its fabric sides coated in dust and marred by stains. How long had it lain there, inside the wall of Uncle Allen’s house? More importantly, why was it there?

He snapped open the latch and swung back the lid. Women’s clothes, by the look of it—slacks, a skirt, several blouses. Beneath them something black. He picked it up, shook it out, and recognized it. An Amish woman’s black apron. His stomach twisted, rebelling the way it had in Afghanistan when they were coming upon a perfect place for an ambush.

Taking out the apron revealed what lay under it...a white Amish prayer kapp. At the very bottom was a framed photograph. He picked up the picture, bad feelings growing. A woman and a young girl, looking at each other, faces lit with laughter and love. Mother and daughter, he’d guess from the similarities in the faces. The child looked to be about four or five.

He set the picture down gently and took a step away from the table. Something was wrong here. The pair in the photo wore typical, though a little outdated, clothing. So how did that square with the Amish clothing in the suitcase?

The pressure that had driven him for months urged him to ignore this, to get on with his plans. Whatever had led to this suitcase being placed inside the wall of the old house his uncle had left him, it was no concern of his.

If he hadn’t opened the suitcase, maybe he could have bought that. But the contents raised too many questions. Too late now to take the easy way out. He pulled the cell phone from his pocket and dialed the Spring Township police.

Ten minutes later a police car pulled into the driveway. The occupants got out and headed for the back door, as country people always did, and he walked out to the back porch to meet them. Before he had a chance to speak, his brother Trey’s pick-up drew to a stop behind the cruiser.

He’d called Trey right after he’d called the police, figuring Trey would want to know. After all, he was the one who’d been here for the past six years while Link was off at college and then the Army. Maybe he’d be able to shed some light on this, but even if he couldn’t, Trey was the kind of person you turned to when there was trouble.

Besides, Trey knew everyone. Adam Byler, now the township police chief, had been friends with Link’s big brother since they were kids, running around together, usually trying to brush off Link, the bratty little brother tagging after them and getting into trouble.

“Hey, Link.” Adam pulled off sunglasses and started toward him, followed by another cop...Dick McCall, fiftyish, balding, with a paunch that strained his uniform shirt a bit more each year. Mac had been a township cop when Link had been soaping windows at ten.

“Sorry to call you out.” Link leaned against the porch post, hoping it didn’t look as if he needed its support. “It’s probably nothing, but I figured you’d want a look at this.”

“No problem. That’s what you pay taxes for, right?” Adam punched his shoulder lightly, the tap a hint of the power that lay behind it. Adam was as solid now as he’d been in high school, with not an ounce of fat on his muscular frame.  “Let’s have a look.”

Trey joined them, giving Link the worried look he’d been using since Link got out of the military hospital and came home to recuperate.

“What’s up?” Trey’s voice was so much like Dad’s that it still shocked Link sometimes. “Adam said you found something inside the wall of the addition.”

He jerked a nod and headed inside. “See for yourself.”

The family room, stretching across the rear of the centuries-old farmhouse, seemed smaller with four men in it. They stood in an awkward circle around the opened suitcase.

Adam took the photo, setting it so they all could see. He glanced at Link. “You know who the woman is?”

Link shook his head, frowning at a vague memory that teased at the back of his mind. “The face seems a little familiar, but that’s all.”

“Yeah, me, too,” Trey said, sounding annoyed with himself that he didn’t have the answer.

Mac picked up the photo. “You three boys are too young to remember, that’s all. It’s Barbara Angelo, that’s who it is.”

“Angelo.” The frown on Adam’s stolid face deepened. “Wasn’t there a scandal or something about her?”

“Ran off from her husband and kid, that’s the way I heard it.” Mac looked gratified at their attention. “Russ Angelo, the husband, said she’d gone back to Indiana to her family, leaving the little girl with him and his mother. Barbara was Amish, see, left the church to marry him, but the marriage didn’t work out.” He shrugged. “It happens. Nobody questioned her leaving all that much, as I recall.”

“But if her suitcase is here...” Trey let that trail off.

No point in going on. Trey was thinking what they were all thinking. If Barbara Angelo had deserted her husband and small daughter, what was her suitcase doing in the wall of Allen Morgan’s house?

Adam closed the suitcase, scanning the sides with his eyes, not touching. “No ID tags. The kind of cheap bag you could pick up at any discount store.”

To Link’s eyes, the bag looked worn and battered, but maybe that was just the effect of being inside the paneling all these years. It was thick with dust, splattered with darker stains and a few nicks here and there.

Adam seemed to scan the stains more closely, then looked around the room. “Where was it?”

“Right here, next to the fireplace.” Link showed them, concentrating on not limping as he crossed the room. Maybe that sledgehammer had been a bit much. The Army said he was as well as they could make him, after what had happened in Afghanistan.

Adam squatted down, studying the area as deliberately as he did everything. “Well, it’s not a crime to put a suitcase inside a wall. You two know when this work was done?”

“We were kids when Uncle Allen built the addition, that’s as close as I can come,” Trey said. “Mom would know exactly, though.”

Adam let his gaze move around the room. “I hate to say it, but I think we’d best make sure there’s nothing else inside that paneling.” He shot a glance at Link. “You mind?”

“Hey, I’m tearing it off anyway. I’ll take any help I can get. One thing’s sure—if there is anything, it has to be in this room. The rest of the house has solid double-plank walls. Not room even for a mouse.”

Let alone a human body, if that’s what they were talking about.

“Well, let’s have at it.” Trey picked up the sledgehammer before Link could reach it. He managed a grin at Link. “You sure this isn’t just a ploy to get us to do the work for you?”

“How else would I get you to do it? You’re still dead set against my selling the old place, aren’t you?” Link softened the question with an attempted smile, but he’d be glad if everyone would stop hovering over him.

“I just wish you’d stick around for awhile, that’s all,” Trey said. He punctuated the words with a swing of the sledgehammer. “Seems like Morgans belong here in Lancaster County.”

Trey didn’t understand this drive of Link’s to leave—that was clear. Link wasn’t sure he understood it himself, but life had to be easier someplace where people weren’t worrying about him all the time. A buddy of his was keeping a job for him in California. He had a simple plan: renovate the house, sell it, move to California, and forget what had happened to his team in Afghanistan and the career he’d once thought to have in the military.

With four of them working, the job didn’t take long. Soon all the old paneling lay in dusty stacks on the floor.

“Nothing.” Adam summed it up, brushing off his hands. “Maybe that’s what the whole thing amounts to. I guess there could be some innocent explanation for the woman’s suitcase being inside the wall of your uncle’s house.”

“Can you think of one?” Trey challenged. Link could hear the worry in his voice. He’d be thinking about how Mom would take this.

“Not off the top of my head,” Adam admitted. “But that doesn’t mean there isn’t one. Still, crime or no crime, I guess I’d better look into it.” He shrugged. “Sorry.”

That was aimed at both him and Trey, Link supposed. After all, it had been their uncle’s house. There would be talk, speculation about the possible relationship between Allen Morgan and the Angelo woman. Adam might want to keep it quiet, but they all knew how impossible that was in a place like Spring Township.

Link picked up the photograph, looking into the big brown eyes of the little girl, feeling again that sense of something wrong he’d had the first time he looked at her face, reminding him of those other children who saw death and destruction every day. Stronger than that—it was a sense of empathy, as if the child meant something to him.

“One thing I do know,” he said. “This kid, or rather, the woman she is now--she deserves to know what happened to her mother.”