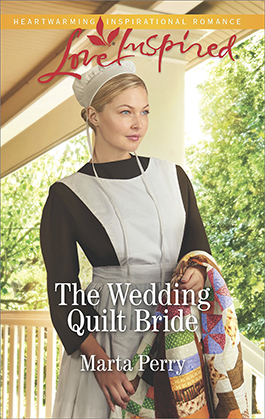 The single mom’s second chance… To become one of the Brides of Lost Creek!

Widow Rebecca Mast returns to her Amish community with her son and a dream—to own a quilt shop. Carpenter Daniel King is determined to help Rebecca and revive their childhood friendship. But as he bonds with her son, Rebecca’s afraid the secret she’s been keeping will be revealed. Can Daniel convince Rebecca he’s a man she can trust—and love?

Two days after Rebecca Mast's return to her childhood home in Lost Creek, she walked down the lane of the family farm toward her future. Her black widow's dress contrasted starkly with the pale greens and bright yellows of a sunny spring day in the Pennsylvania countryside. Her son, six-year-old Elijah, trudged next to her, holding tight to her hand rather than skipping and hopping ahead down the lane like one of his cousins would.

It was early yet, she assured herself. Surely soon he'd forget the darkness of the past few years and be like any other Amish child his age. That was the heartfelt prayer of her heart for her son. As for her…well, the return to normal would take longer, if it ever happened.

But at least she was home, with her family around her, and today she would take the first step toward a new life for her son and herself. That alone was something to make her heart thankful.

The frame two-story house came into view ahead of them, standing at the point where the farm lane met the country road. When her mammi had written that old Mr. Evans had gone to live with his daughter and put the house up for sale, she'd known exactly what she wanted to do with the money she'd receive for selling the farm she and James had owned in Ohio.

The down payment James's brother John had given her had been enough to cover the cost of the house. John's continuing monthly payments would pay to remodel the old place into a secure, peaceful home for her and Elijah, and the quilt shop she'd have in the downstairs rooms would support them. That was the extent of her dreams for the future, and it was enough.

Daniel Mast stood waiting by the back porch, leaning against one of the posts as if he could wait there all day for her, if need be. As they came closer, her stomach tightened as she searched the tall, broad figure for a glimpse of the neighbor boy who'd been her childhood playmate. She didn't find him, nor did she see the gangly teenager who'd told her all about his crushes on the girls in their rumspringa group.

Daniel had grown into a strong, sturdy-looking man. It was her own uncertainty that made her long to find something in him that was familiar. The rich, glossy brown of his hair was a bit darker now, and the fact that he didn't have the traditional Amish beard allowed her to see his stubborn jaw.

He'd always had that stubbornness. His golden brown eyes had a glint of kindness that she felt sure reflected his kind heart, and his lips curled in a familiar grin. Her tension evaporated, and she smiled.

"Rebecca!" He came forward now to greet them, taking her hands in both of his for a momentary squeeze. "It's wonderful gut to see you again." His face sobered. "I'm sorry for your loss."

She nodded. She had a stock of reasonable comments to use when someone commented on her widowhood, but they didn't seem appropriate for Daniel, who'd known her so well.

Daniel didn't seem to notice. He'd focused on Lige, who was hiding behind her skirt, and he squatted down to eye level.

"You must be Elijah. I've heard about you from your grossmammi. She told me you just turned six. Is that right?"

"I'm Daniel," he said. "I live over there." He pointed across the field to the neighboring farm. "When your mammi and I were your age, we used to play together every day."

Still no response. She tried to think of something to say to pull his attention from Lige, but Daniel was already rising, his smile intact. "Ach, it's hard to get to know a lot of new folks at once, ain't so?"

"Yah, it is," she said, grateful for his understanding. "Sam tells me that your carpentry business is a wonderful success these days." Sam, Rebecca's older brother, had been best friends with Daniel's older brother, Caleb. It had seemed natural for her and Daniel to pair up, as well.

"Ach, I wouldn't say great, but it's doing okay. It doesn't give me much time to help Caleb with the dairy farm, but I do what I can. And he's got Onkel Zeb and young Thomas Stoltz to work with him, too."

"I'm sure he needs it, running such a big dairy operation." Daad had told her how Caleb had increased his herd until it was one of the larger ones in the valley. "I'd be most happy if you have time to take on this job for me."

She glanced at the house, trying to picture it the way it was in her dreams. With Daniel's help, that dream could be a reality.

"Let's go in and have a look at what you want done," Daniel suggested. He held out a hand as she reached the three steps up to the back porch. "Mind the treads, now. There's a loose board there I'll fix right off."

She nodded, turning to help Lige up to the porch. "It's a little bit run down now," she told him. "But Daniel will help us turn it into a gut home for us."

Lige darted a cautious sideways glance at Daniel, but he still didn't speak. She tried to suppress a sigh. If she'd realized earlier the harm James' behavior was doing Elijah…but what choice did she have? James had been his father, and there was no getting away from that.

The back door opened into the kitchen, and they stepped inside.

"The cabinets need some repair," Daniel said, swinging a door open and closed. "But they're good solid wood—none of those thin layers they use sometimes now."

Rebecca was busy picturing the kitchen with the cabinets freshly painted white and seedlings growing in pots on the wide, sunny windowsills. "The gas range is perfect," she said. "But I'll have to replace the electric refrigerator with a gas one."

"I don't know much about the electrics, but there's a man I worked with on a few Englischer houses who does that kind of work. He could take out all the electric for you."

"Wonderful gut." Surely the fact that things were falling into place meant that her plans were in accord with the gut Lord's will. "Our table will fit in this space, won't it, Lige?"

He nodded, but hadn't yet let go of her skirt.

"When do your things arrive?" Daniel pulled himself out from behind the refrigerator, a cobweb clinging to his straw hat.

"In a few days." Smiling, she reached up to lift the cobweb away, inadvertently brushing his cheek. She withdrew her hand quickly, trying to ignore the way it tingled from the brief contact. "The family will store everything for us until we can move in here."

The back of the house held the kitchen, a pantry, and two smaller rooms. One would be their living room and the other a storeroom or workroom. Swinging the door open, Rebecca stepped into the room at the front of the house. Her breath caught.

The room extended across the whole front of the house, and sunshine poured in the windows to lay across the wide-plank floors. The back wall would be perfect for shelves, and she could have a display area of quilts on one side and stocks of fabrics and notions on the other.

"You look happy," Daniel said, his brown eyes warm. "Is this going to be your living room?"

"No." She swung in a slow circle, taking it all in. "This will be what I've been dreaming of. This will be my quilt shop."

She knew her happiness had to be shining in her face. And when she looked at Daniel, she saw her anticipation reflected in his eyes, crinkling as they shared her feeling. There, at last, was her old friend.